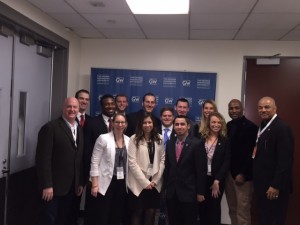 B-Hop. The Alien. The Executioner. These are the nicknames that have been assigned to former middleweight boxing champion, Bernard Hopkins, during his illustrious 27-year career.

The fighter added ‘orator’ and ‘advocate’ to that list when he addressed a contingent at the Sports Industry Networking Career (SINC) conference, held Feb. 20-21 at George Washington University, in Washington, D.C. Hopkins, a Philadelphia native, later spoke privately to undergraduate and graduate students, faculty and administrators from Temple University’s School of Hospitality and Management (STHM), and posed for pictures with the group.

Hopkins spent his formative years in a Philadelphia housing project and, at 17, was sentenced to 18 years in prison for nine felony charges. He was released in 1988, after five years behind bars, and launched his professional boxing career in the same year. He has committed his adult life and years as a professional boxer to encouraging personal advancement through education and determination.

In his career, Hopkins first won the International Boxing Federation in 1994. He’s since held the World Boxing Council, the World Boxing Association, the World Boxing Organization, and The Ring middleweight titles. He’s the only man to have simultaneously held all four major sanctioning bodies’ championships. At 50, Hopkins has yet to retire from the ring and juggles training and his partnership with Oscar De La Hoya’s combat sport promotional firm, Golden Boy Promotions.

STHM Associate Vice Dean Jeffrey Montague said Hopkins’ address was “passionate, sincere and an uncut version of his life, legacy and the professional desire to be the best.”

Daniel Van Norton, a second-semester student in STHM’s Master’s of Science in Sport Business program, seconded Martin’s opinion. Hopkins message, Van Norton said, was “inspiring for any young individual trying to make a significant impact or leave their own legacy within the sports business industry.”

At the SINC conference, Hopkins joined several notable speakers, including representatives of the Philadelphia Eagles, Under Armour and the Baltimore Orioles, to emphasize the merit of an education in sports management. As a sponsor of the event, STHM encourages its students to network within the tourism, hospitality, sports and recreation management industries.