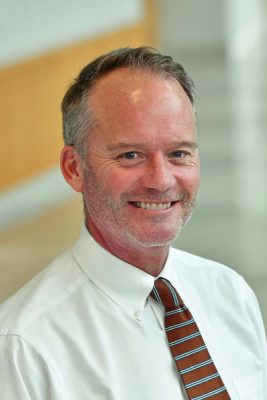 John Allgood is the Academic Director of the Executive Master of Science in Sport Business and Assistant Professor of Practice at Temple University’s Sport, Tourism and Hospitality Management department.

As Academic Director, Allgood leads program that serves executives in the sport industry or executives seeking to emerge into sport. He currently mentors and advises executives from NHL, MLB, NFL, NBA, ESPN, and NCAA athletic departments. Allgood was named Rookie of the Year for both STHM and Fox School of Business in 2018 for use of technology in the classroom.

Allgood writes a column and Op Eds on current issues in sports business. He also is seasoned speaker on panels and seminars.

Allgood spent 15 years with the Oklahoma City RedHawks, a Triple-A baseball team. He served in a variety of capacities, beginning as Public Relations Director in 1995 with the RedHawks organization. He continued his ascent through the organization, eventually serving as Executive Director through the franchise’s most successful seasons. Allgood guided the RedHawks to their highest single-season attendance marks in the history of Oklahoma baseball, honoring him with Pacific Coast League Executive of the Year as the team’s Executive Director. He was instrumental in operating the annual Bedlam Baseball Series, the Phillips 66 Big 12 Baseball Championship, NCAA Baseball Regionals and multiple MLB exhibition games.

Allgood was the driving force in creating year-round events at the Bricktown Ballpark, such as snow tubing during the holiday season and a variety of concerts, ranging from Dave Matthews Band to local Christian artists. Allgood served on the prestigious Triple-A Baseball marketing committee during his tenure with the RedHawks. He also hosted the first Triple-A baseball national championship. Allgood received a master’s degree from the University of Oklahoma and served as an adjunct professor in the Price School of Business. He served as the founding chairman of the advisory board for the management division of the Price School of Business from 2009-2010. Allgood is the past chairman of the advisory board.

Allgood was also the faculty representative for the University of Oklahoma Sport Management Club. He served as the chairman of Limbs for Life, leading the charitable effort for thousands of amputees worldwide. He is a former president of the Bricktown Association. He was named a JC Penney Distinguished Visitors Series honoree, a recognition awarded to Oklahoma-connected executives in business, government or academia who are proven leaders in helping to form society's conventional wisdom.