A Young Alum’s Journey from Dallas to Destination DC

One of the many talents of Jamar Root ’22 is taking advantage of any opportunity to broaden his horizons. A sport and recreation management student from Dallas, TX, he leveraged several exceptional  internship and leadership experiences in tourism as well as sport. When he returned to on-campus study for his senior year, the prestigious organization Destination DC invited him to do an internship as part of the Tourism Diversity Matters’ Diversity Apprenticeship Program. The organization then asked him to stay on for several additional months to focus on sport sales initiatives. 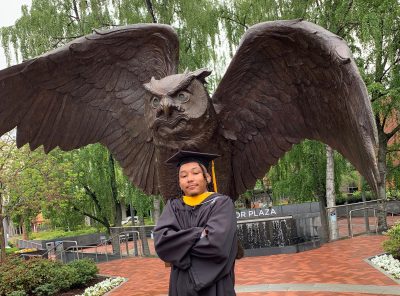 Root used his time studying remotely during the pandemic to follow his entrepreneurial vision and launched a podcast. A National Coalition of Black Meeting Professionals scholar (2019), he has also spent time as on-air talent for Spot on Sports, a tutor for Beat the Streets Philadelphia and account manager for MOLEFI Kete Asante Institute for Afrocentric Studies.

As Root continues to pursue his dream role in sport, he sat down with distinguished STHM alumnus Sherman Neal II ’20 to talk about career choices and finding a meaningful path. 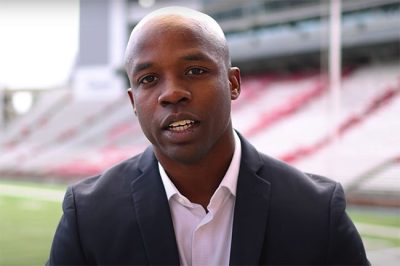 Neal is an attorney who, after four years in the Marine Corps, coached Division I college football while concurrently pursuing two master’s degrees: an executive master of sport business at STHM, followed by a master of laws in entertainment, art and sports law. His social justice work has included criminal justice advocacy for Amnesty International in Kentucky, and he serves on the board of WFTDI, run by Erica Vanstone EMSSB ’19. A native of Naperville, IL, Neal has been busy in his most recent role as Strategic Initiatives Coordinator at Washington State University (WSU). He is the recipient of the 2021 STHM Alumni Impact Award.

Sherman Neal: You were a sport and recreation management student, but you’ve had a lot of varied experience.  What were some of your internships before working on the tourism side as a senior?

Jamar Root: I came to Temple to pursue my passion for sport, but I stayed open-minded over my four years so I could experience the full range of what STHM and the industries have to offer. I got to work for the Phillies and Temple football and the Goodyear Cotton Bowl Classic. I went to Colorado Springs for a diversity inclusion conference that the U.S. Olympic Committee hosted on Finding Leaders Among Minorities Everywhere (FLAME).

Neal: What was your day-to-day experience like at Destination DC?

Root: I spent time in each department: Tourism/Sports/Visitor Services, Conventions Sales and Services, and Marketing and Communications. Since I wasn’t boxed into any one thing, it helped me figure out what I want to do going forward, especially in sport. On any given day, I’d be navigating 10 projects at a time, having constant meetings—I tried to contribute something valuable at each one. Sometimes there’d be a last-minute site visit, since the sport and entertainment industries are unpredictable. I like that about them.

Neal: Who do you rely on to help you make decisions about what’s right for you and your career?

Root: I take opinions from people I trust—who don’t have their own agenda and care regardless of what decisions I make. My freshman year at the PHL Diversity and Inclusion Conference, I met Margaret Spence, who’s a leading voice in diversity in Philly. She said, “If you’re ever in a place and you know there’s no more growth left to be had, you have to move on.” I always have her voice in my head when I’m making big decisions.

Neal: The classes for my master’s program were remote. What were some of the best things for you about being at STHM and on the Temple campus?

Root: There’s something about the STHM environment that makes you comfortable. The school is like a close-knit family—it meshes people together. I knew everyone in my class by sophomore year. Plus the location and the campus feel—but more than just the university. You can hop on the Broad Street line, and have a plethora of things to do. I was able to experience everything Philly has to offer. Not to mention getting on Amtrak and being in New York or DC just like that. I know I’ll get the best out of myself because of having been here. It makes me want to do even more and see more places.

Root: You played Division I football and later became a Division I coach. What made you make a switch away from coaching?

Neal: In coaching I can maybe have an impact on the 100 or so football players on that team. But now working on strategic initiatives at WSU, I can have an impact on over 500 athletes. I get to explore on-the-ground issues in the NCAA, given that college students are now getting the right to profit from their own name, image and likeness (NIL).

Root: I’m trying to decide on my next step and also think about the long term. What gave you the courage to pivot so much in your career—from law school and the marines to social justice, sport and higher ed?

Neal: You’ve focused on building your resume, but also your brand. How has producing and hosting the podcast “Root of Everything” come to be a driving factor for you?

Root: I’d always had the back of my mind that I could start a podcast. When COVID happened, the timing seemed right. When I first was making it, I thought, “If nobody listens, it’s okay,” because I was growing so much from the process. I spent a summer developing stories and ideas and ideologies—and learning how to market it on social media. Then I started to see sharing my journey as a way to help other people.

Neal: How do issues of diversity factor into what you learned from being at Temple?

Root: At the FLAME program in 2019 I met an idol of mine, who was the chief diversity and inclusion officer for major league baseball. She told me, “There will be more and more options for people of your generation—beyond the diversity and inclusion leadership roles that are so prominent now.” That really opened my eyes to thinking bigger.

Neal: When I graduated from college in 2009, there was no such thing as a diversity and inclusion officer. Things have begun to change in the last decade at that level in sports.

Root: I think you have a responsibility not only to yourself, but to the world to chase after what gets you going in the morning. One of the driving forces in my decisions is knowing that there’s somebody out there who wishes they were in your shoes and had the opportunity and the support you have. I’m not going to waste it just to be comfortable.

Neal: What advice would you give other STHM students sorting out their choices?

Root: To find what you like to do, and also what you don’t like to do. And don’t be afraid of the unknown. I’m willing to jump off a ledge, even when I’m scared. I’ve failed a bunch of times. But otherwise you don’t have a chance of reaching what you dream about. I couldn’t have imagined how good college could have been. Take a chance—I did, and feel like I got it all.