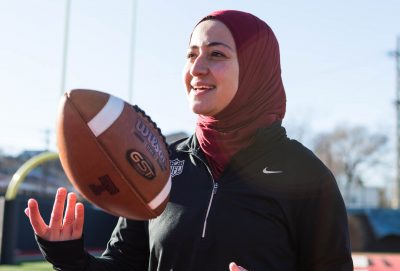 Ameena Soliman (FOX ’17, STHM ’19) was one of two alumni honored this spring with a Young Alumni Diamond Excellence Award—just one of the ways that she stands out as an alumna as well as a scouting pro in the NFL. She has shown her leadership and accomplishments to be exceptional in numerous ways in the two years since she earned her master’s at STHM.

This modest pioneer is more than player personnel coordinator for the Philadelphia Eagles—a position she grew into after joining their scouting department as an intern while at STHM in 2018. She’s gone on to initiate a unique, league-wide networking organization that is bringing together a vast majority of the women working on the operations side of the NFL.

Like most pioneers within their industry, Soliman’s too busy being head-down trying to excel and improve her own performance to focus on the qualities that others would say make her unique at the Eagles organization. Regardless, it’s hard to overlook that she is one of the few women to work behind the scenes and is currently the only Muslim on staff. (She adds that she enjoys seeing the industry evolve, as in January 2021 when Robert Saleh was recently promoted to head coach of the New York Jets.)

Soliman had to learn many of her current responsibilities on the job, but says some of her skills come directly from her time at STHM. Her role as a graduate student as a member of the executive board committee of the STHM Sport and Governance Association in particular gave her experience in coordinating a lot of events and guest speakers, trips and other opportunities that connected her with individuals at professional sports organizations. She is now leveraging this experience to lead and manage events for the group NFL Women in Football Operations. 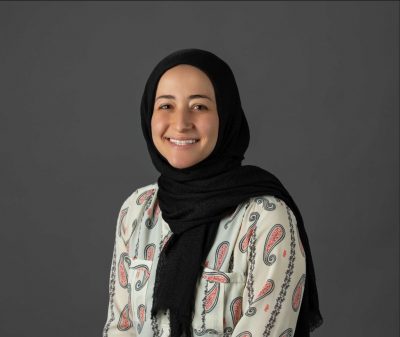 Climbing the Ladder Inside Pro Football

In 2020 Soliman earned the distinction of a grant from the Scott Pioli & Family Fund to support her development, education and training as an aspiring female scout in professional football.  In her current role, she helps to evaluate the pro and college players, including pro scouting advances, free agency, and draft preparation, as well as spending some of her time on overall football operations. This builds upon several years’ experience, starting as a football operations/recruiting graduate assistant with Temple football. After several seasons she’d joined the NFL league office as an intern and then a player personnel assistant.

Interestingly, Soliman notes that scouting was not a role that she ever consciously sought out for herself. Her family in Yardley, PA were into sports but not huge football fans, per se. She hails from a long line of pioneers, including her dad who immigrated to the U.S. from Egypt as a child and her maternal grandfather, who was a Bosnian refugee. She herself is a blackbelt in TaeKwonDo, and “retired” after 9 years of spending many hours training.

Soliman’s highly aware that, once she got to the Eagles, her advancement has been due to more than her inherent desire to work hard, work well as a team member, and as she says “be a good person.” She’s quick to mention the number of colleagues and mentors who were pivotal in advancing her career. “There were individuals who not only trained me in the nuances of scouting—how to evaluate and watch players,” she says. “With every step, someone held open a door, or stood on a table for me. They stuck their necks out to support me.”

Charting New Territory for NFL Women Behind the Scenes

One way in which Soliman demonstrates her exceptional commitment to the field of sport is a recent initiative she’s undertaken with her colleague Catherine Raiche, the Eagles’ football operations/player personnel coordinator. Together—in the midst of the pandemic—they’ve created the group NFL Women in Football Operations, which brings together more than 80 (of about 95 total) women currently working across all 32 NFL teams—in coaching, scouting, football operations, football administration, nutrition, athletic training, and analytics.

Soliman acknowledges that her experience has been positive overall, despite the fact that in terms of gender she is in a vast minority at the Eagles, as well as in pro football overall. “Since there are only a handful of people at my level of the organization,” she says, “like so many women in many industries, I have had to rely happily on the generosity of male mentors.” Although a lot of men have been willing to serve as her ally, she of course knows women who, despite the quality of their work, have been excluded from important opportunities. And yet at some point, she began to think about a way to connect the other women across the league in a more formal way.

“In 2020 Catherine and I saw an opportunity to connect these women,” she says, “to share resources, ideas and make allies in the industry. We were pleased that our outreach inspired about 80 percent of the women we reached out to to take part in the group.”

To date, she and Raiche have held a number of virtual events, as well as paired about 20 women who were more senior or experienced in their respective areas with younger or less experienced. One event focused on a conversation that responds to the current need in the culture to address issues of social justice, which the two women felt was an important way to take advantage of this network.

They have also created a social justice challenge initiative, where 20 group members decided to challenge one another—”to learn something, support someone, or share resources,” she says. Through this challenge, some members volunteered at polling places while others supported organizations/initiatives/minority-owned businesses including Big Brothers/Big Sisters, the ACLU, the Eagles Social Justice Fund, Philadelphia Black Giving Circle, Black Mamas Matter Alliance, and the Baltimore Racial Justice Association.

“The way I see it is, the better job I do, the easier it is—once I move on to other positions within an organization—for decision-makers to say, ‘Let’s hire another woman,’” Soliman says. “If I can set a good example, but also help other women gain the support they need to maximize their performance, then at the end of the day, everybody wins.”