Roughly 800,000 people flooded Philadelphia in late September for a visit from Pope Francis and the World Meeting of Families, a global gathering of Catholics.

Gathering Philadelphia’s leading minds in tourism, international business, and government at its event, titled, “The World Meeting of Families is Gone: Now What?”, STHM and CIBER aimed to address how Philadelphia could leverage the international exposure and media focus it received from the World Meeting of Families in order to further its status as an elite host for future global events.

“This was our finest hour and it can be again,” said Pat Ciarrocchi, the event’s keynote speaker and a longtime Philadelphia news anchor who covered the World Meeting of Families.

“The World Meeting of Families brought Pope Francis to Philadelphia and, along with him, more than 15,000 reporters representing media outlets from around the world,” said Dr. Elizabeth H. Barber, STHM Associate Dean. “This event generated an unparalleled level of visibility to viewing audiences that wouldn’t have otherwise been exposed to what Philadelphia has to offer. In order to best capitalize on the tourism opportunity created by the World Meeting of Families, we as a city will need to maintain the open dialogue we’re initiating today through this event.” 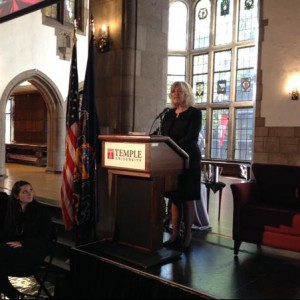 Dr. Elizabeth H. Barber, Associate Dean of the School of Tourism and Hospitality Management, speaks at October’s “World Meeting of Families Has Gone: Now What?” event.

In examining the future of a post-Pope Francis Philadelphia, Philadelphia Convention & Visitors Bureau (PHLCVB) CEO and President Jack Ferguson nodded to the efforts by Desiree Peterkin Bell, director of communications for the Office of Philadelphia Mayor Michael Nutter, the Mayor’s Office, and Visit Philadelphia in building upon the city’s strengths.

“We can dissect this forever, but what we will learn is what works,” Ferguson said.

In the days and weeks following the WMOF, Ferguson said he observed how the event boosted the reputation of the city’s businesses, for how well they worked with a large influx of tourist traffic. This positive interaction, Ferguson said, won over consumers.

To do that, Meryl Levitz said she designed a faith-based marketing strategy that invited those looking for love and family with the pope to experience it in Center City, too.

“We watched, we listened, and we helped tell Philadelphia’s story,” said Levitz, CEO and President of Visit Philadelphia of the campaign that featured local catholic organizations, bible studies and family-friendly events.

For Brian Said, executive director of the Tourism Division of PHLCVB, Bell’s efforts to remove the walls between the pope and those wishing to see him resonated with Philadelphia’s foreign visitors. Accessibility to Pope Francis, according to Said, was what put Philadelphia on the map as a global city that is welcoming to all.

“We cannot arm-wrestle New York, and we cannot arm wrestle D.C.,” he said. “We have to work together to show Philadelphia is both safe and fun.” 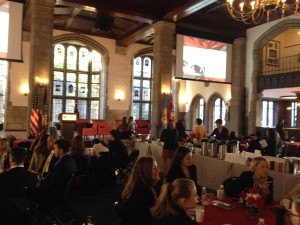 Zabeth Teelucksingh, executive director for Global Philadelphia, looks forward to that “next great event,” as Ferguson called it. Global Philadelphia works to show foreign travelers the city’s significance as a birthplace of democracy and innovation. Philadelphia has the potential to be the next World Heritage City, which Teelucksingh said is a highly marketable title in countries looking to experience a quintessentially America city. Should Philadelphia become the next World Heritage City, it will enjoy increased property value, stature and economic gains, Teelucksingh said.

All of the event’s panelists agreed that the city’s next steps must be geared toward reminding the world that Philadelphia has successfully managed a world-class event once, and is capable of doing so yet again.

“No one else could have been at the helm of this event,” Bell said. “We’ve done big events and we do big events well. We’re on the map.”