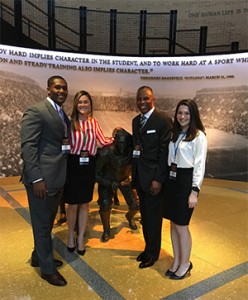 Three students traveled to Indianapolis to represent Temple University’s School of Sport, Tourism, and Hospitality Management (STHM) at a national conference geared toward the professional development of collegiate student-athletes.

The NCAA’s Career in Sports Forum invited 200 student-athletes, from a pool of more than 1,000 applicants, to learn more about and explore potential career paths in sports, with a primary focus on college athletics.

“Supporting NCAA student-athlete leaders with their education is a key goal for the Association,” said Bernard Franklin, the executive vice president of education and community engagement at the NCAA. “Our Career in Sports Forum puts student-athletes and postgraduate scholarship recipients in a non-traditional academic setting where they can learn directly from successful leaders, which can have a positive impact on their future.”

Upon return from the event, the Temple trio spoke positively about the backgrounds of the Forum’s keynote speakers and the subject matters upon which they spoke. 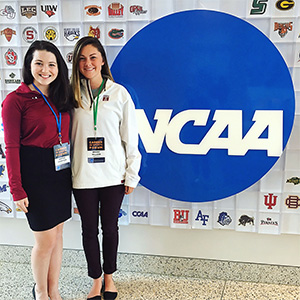 Kemnitzer, a senior fencer, found a parallel between the panelists.

“While they all took a different path to reach their desired career, each one showed that you can achieve your goal by working as hard as you can,” said Kemnitzer, one of Temple’s Student-Athlete Advisory Committee (SAAC) members.

For Williams, a senior lacrosse player who aspires to become a university’s athletic director, hearing from women in high-level positions in their respective athletics departments was critical.

“By far, those were the most-impactful moments for me,” said Williams, who will serve as SAAC’s president for the 2016-17 academic year. “It’s not often that women reach that position, so having the opportunity to speak with them directly gave me the confidence to know that my dream can be achieved.”

Kemnitzer similarly hopes to become a college athletic director. At the Career in Sports Forum, she said she learned more about her leadership style through a DISC personality assessment. She, like her fellow attendees, was required to complete the examination in advance of the Forum.

“The results showed that I thrive on working with others and in a team setting,” Kemnitzer said. “It also suggested that I’m an extrovert, which in some cases could be a detriment because it could clash with other people’s personality styles. The DISC assessments gave us the chance to learn more about leadership styles and communication skills, which I found to be extremely interesting.” 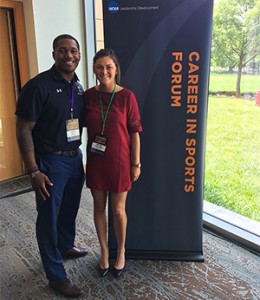 STHM’s Avery Ellis and Brooke Williams head to the next event at the NCAA Career in Sports Forum in Indianapolis.

The students took brief breaks from the Career in Sports Forum to tour the city and NCAA Headquarters, which included a visit to its Hall of Champions and its interactive and historical exhibits.

Ellis, a football player who earned his undergraduate degree from Temple’s College of Education, said he used the Career in Sports Forum as an opportunity “to be a sponge.” Making the transition to STHM, where he’ll embark on its MS in Sport Business program, Ellis didn’t skip a chance to learn from his peers.

“It was interesting to hear what fellow student-athletes were thinking and saying, because they’re in my shoes,” Ellis said. “They gave me an extra push, to keep working hard to reach my goals. I also liked speaking with Clyde Doughty, the athletics director at Bowie State, about the importance of his job. It’s not a job that’s simply pushing papers. It requires insight and involvement at every level. At the core, it’s helping students achieve greatness.”