Leaders from the American Athletic Conference and its 12 member institutions participated in the Conference’s Academic Consortium Symposium on March 23-24. The Symposium, held at Philadelphia’s Hilton Penn’s Landing Hotel, brought together conference athletic and academic leaders as well as student-athletes. The two-day event focused on student well-being, and featured panel discussions involving mental health, rest and recovery, traumatic brain injury, body image, and nutrition, among other subjects. 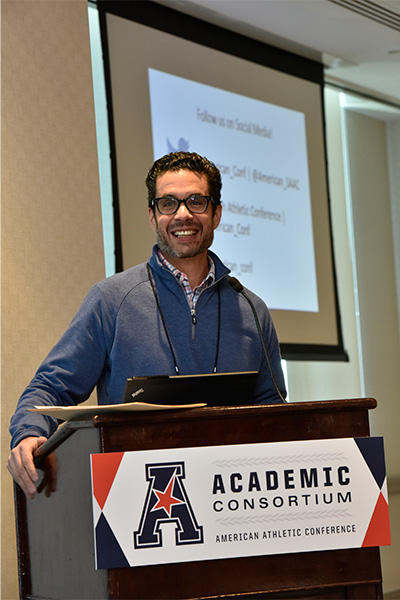 “The symposium provided us with cross-university collaboration to bring attention to an issue at hand – in this case, student wellness – and afford opportunities for grants to generate cutting-edge research and present new findings in sport,” said Dr. David Szymanski, University of Cincinnati FAR.

The American Athletic Conference’s Academic Consortium provided “a terrific setting for sharing and learning more about the academic and personal well-being of our students,” said Commissioner Mike Aresco.

“The conference and specific panels at the symposium gave students a chance to bring our opinions regarding well-being directly to the people who can make change at the administrative level,” said Fitzgerald, a track and field athlete.

Dr. Christine Copper, Navy’s FAR, shared a personal anecdote during one panel discussion that was geared toward the development of leaders both on and off the field. Annually, the Naval Academy submits its sport team captains to a two-day leadership retreat in Gettysburg, Pa., where one of the nation’s most-significant military battles was waged. The desired outcome, Copper said, is that Navy’s athletic captains develop confidence in speaking and in working with their teammates, while also establishing baseline measures of success. 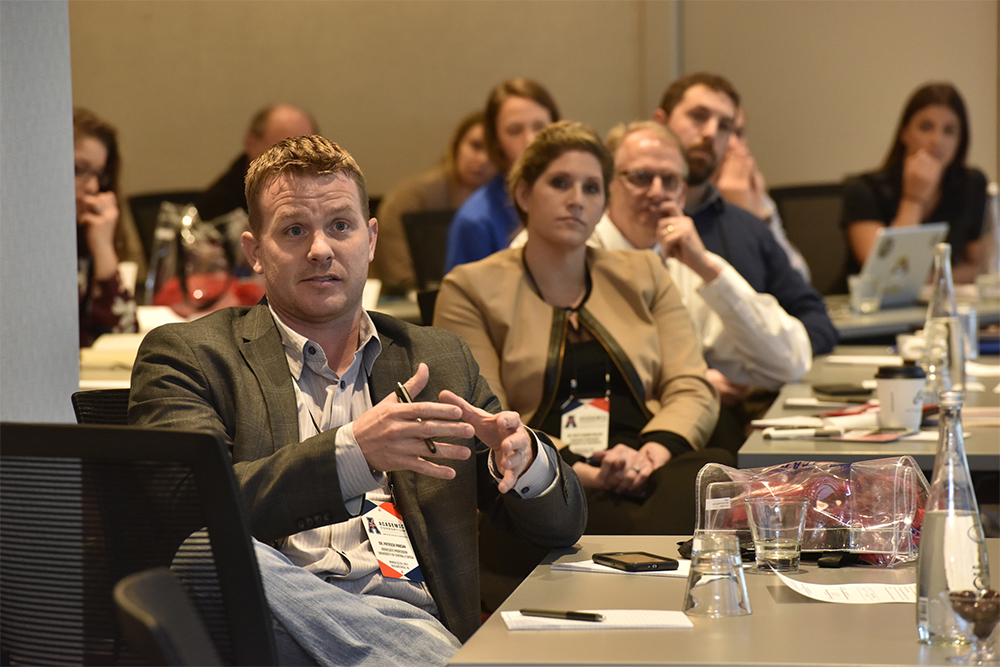 “We understand that we need to give our team captains every resource necessary in order to have success in their sport and away from the game,” Copper said.

On the same panel, David Bertrand, who leads Southern Methodist University’s department of applied physiology and wellness, called for a more-active role for faculty members in the leadership development of student-athletes outside the classroom. 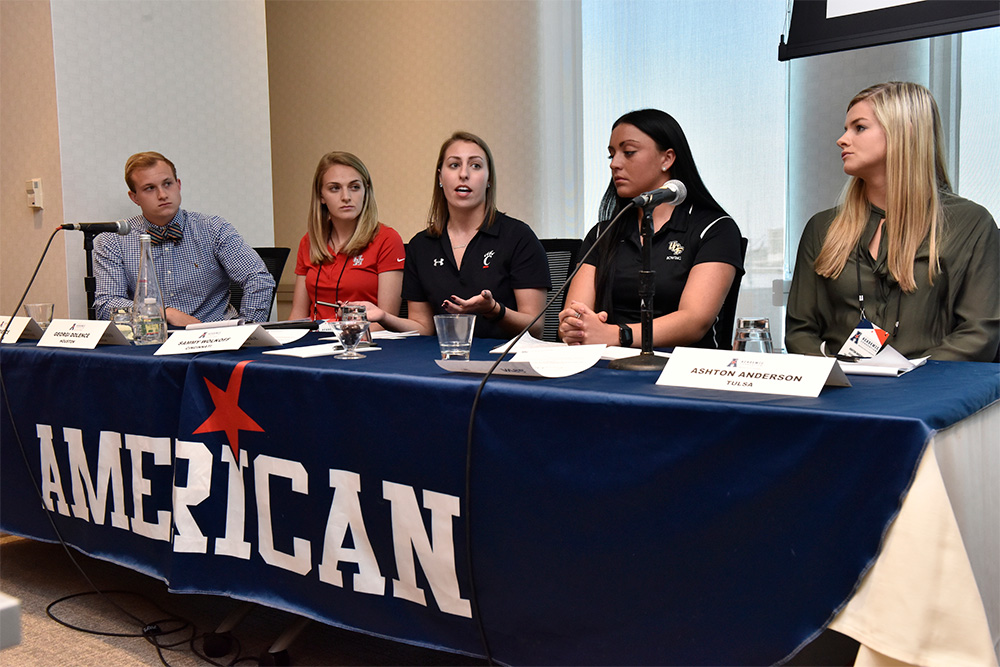 Samantha Wolkoff, center, a student-athlete from the University of Cincinnati, provides her thoughts during a panel discussion.

Although historically much attention has been paid to the preservation of a student-athlete’s physical health, the panelists said that mental health is equally as important. Leaders from East Carolina University, Temple, and Cincinnati shared measures they follow to ensure student-athletes’ reduced stress levels, improved time management skills, and decreased instances of depression—including the implementation of internal and external assessment surveys, and the use of float tanks to combat stress.

The prevention and treatment of traumatic brain injuries, or TBIs, has also been a prevalent subject of conversation throughout the sports landscape. Experts from the University of Central Florida, Navy, and Temple discussed developments in concussion management, while student-athlete Enna Selmanovic delivered a presentation on the concussion protocol in place at Cincinnati. 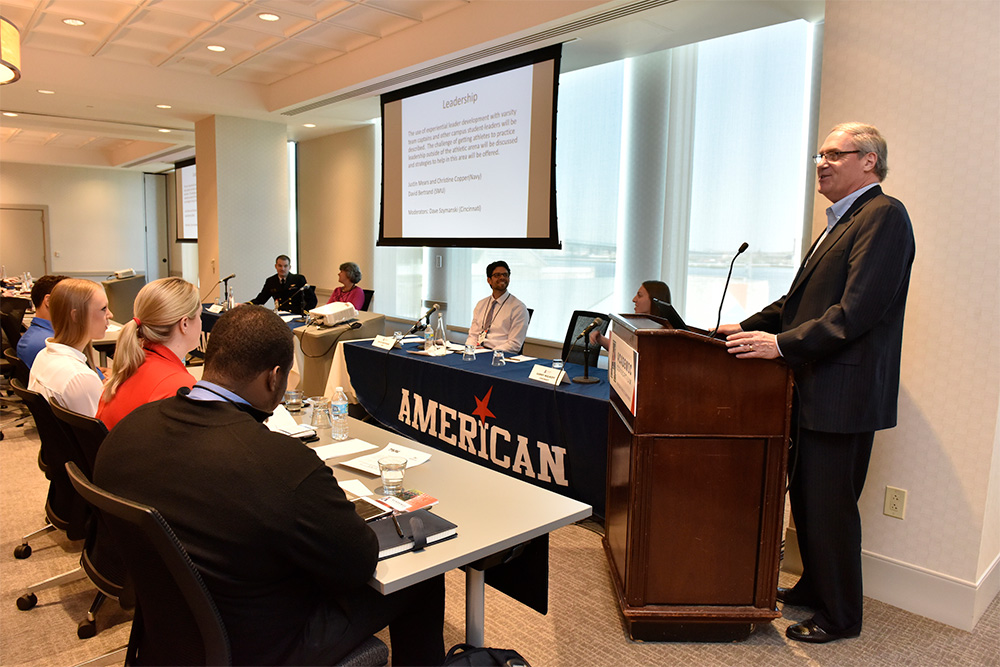 “Our sports neurologists and athletic trainers care about the unknown that is associated with concussions, and that’s why we as an athletic program have been able to develop a protocol that might be the future of TBI management,” said Selmanovic, a swimmer at Cincinnati. “After speaking with doctors and trainers at the Symposium, I was happy to see that our protocol has influenced other programs in the conference. I hope we, as a Conference, can collectively become leaders in concussion research, among other areas.”

Temple provost Dr. JoAnne Epps summed up by saying, “This inaugural gathering is the beginning of something special, and something critically important for the wellness of our student-athletes.”