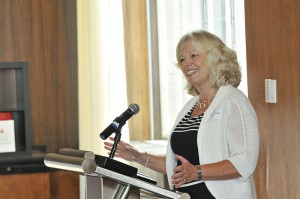 In only a few months, the tables had turned on Britney Talty.

A recent graduate of the Master’s of Science in Sport Business program, Talty had been asked by School of Tourism and Hospitality Management administrators to speak to a room of the School’s first- and second-year Master’s students.

No big deal, Talty said, accepting the offer. Facing strangers, as it turns out, is a situation in which she thrives.

It’s how Talty networked her way from Master’s student to Manager of Client Services at Turnkey Sports & Entertainment. And it’s the message she encouragingly spread Aug. 21 at Loews Philadelphia, where STHM hosted its annual reception to welcome new and returning graduate students.

“Spend time talking to one another tonight,” said Talty, a 2014 alumna, “because that’s networking at work. That’s how you’re going to get your jobs after school – not because you saw a job posting, but because of who you knew that could put in a good word for you about a job before it even got posted somewhere.”

The event, which included an alumni panel with Talty and two others, served as the launch to a weekend-long orientation for STHM’s first-year graduate students and a welcoming party for those returning for their final year in the program.

Second-year Master’s students engaged in a pinning ceremony, the first of its kind for STHM, with Associate Dean Dr. Elizabeth Barber and Manager of Marketing and Enrollment Management Michael Usino pinning and greeting STHM’s continuing students. 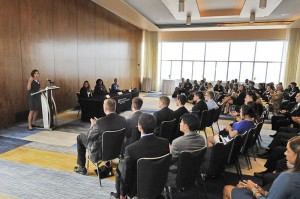 Kathe Archibald, Associate Director of Development of the School of Tourism and Hospitality Management, and a second-year Master’s student, speaks to those gathered at the School’s New Master’s Orientation.
Credit: Jim Roese

Continuing with the nightlong theme of self-promotion and networking, STHM Manager of Graduate Student Services James Alton asked the second-year students to approach the podium and give “their best elevator pitch” as a means of breaking the ice and introducing themselves to the incoming class. “Don’t take any opportunity here for granted, because it’ll be worth your while,” said Rich Screnci, a Master’s of Science in Sport Business student.

Talty and the rest of the alumni panel – which included Vanessa Mapson, Director of Group Sales with the Philadelphia Phillies, and Lacey Hagen, Manager of Talent Acquisition at Loews Hotels & Resorts – engaged the students with first-hand accounts of their experiences in STHM’s graduate program.

In particular, Talty told of her opportunity to represent Temple and STHM in the Case Cup, an annual competition between Master’s students conducted at the National Sports Forum (NSF). There, she and her team were given 24 hours to research and prepare a multidisciplinary case study presentation to representatives of a company – in this case, a sponsorship arrangement between Chobani and the United States Olympic Committee in non-Olympic years.

The NSF was “one day to problem-solve, and three days to network,” Talty said. At the conference, she met a Turnkey representative and forged a professional connection that, eventually, would help lead to her present career. 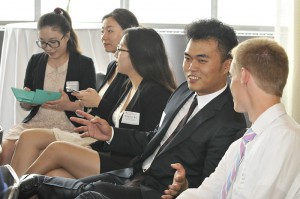 “When you finish this program, you’ll be among the top-90th percentile of the educated in this country,” Kent said. “It’s a challenge I congratulate you for embarking on. We as faculty will give you the biggest challenge here in the hope that you attain the greatest reward coming out of this process.”

Next, Assistant Dean Jeffrey Montague took the microphone, lauded the graduate students on the professionalism of their attire and recommended they use this night as “the time to begin your quest to be the best you can be.”

“The program and the people here were too good to pass up,” said the native of Palmyra, Pa.

Added first-year graduate student Melissa Gemore, of Bridgewater, N.J.: “I didn’t want a small-town school, so Philadelphia and Temple were perfect. And everyone’s been so uplifting since we arrived.”