STHM undergraduate to appear on Wheel of Fortune 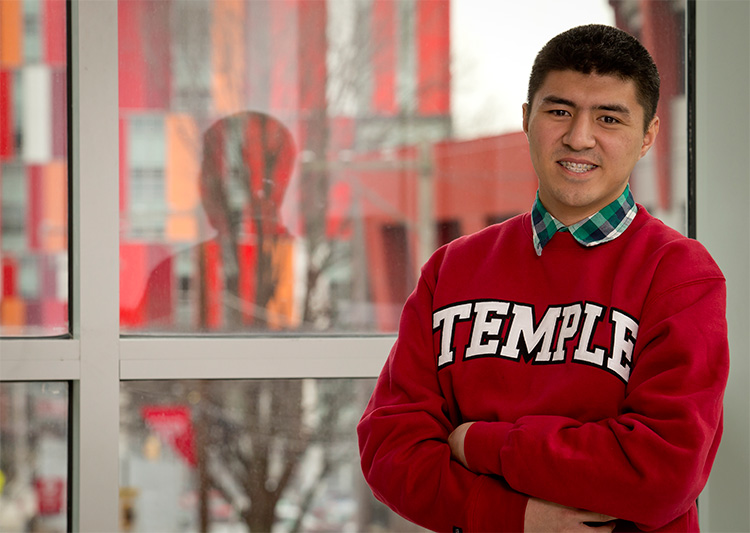 A student from Temple University’s School of Tourism and Hospitality Management (STHM) will live out a lifelong dream when he spins the big wheel on an upcoming episode of Wheel of Fortune.

Matthew Velasquez traveled to Los Angeles recently to tape his episode, part of Wheel’s College Road Trip Week promotion. The episode will air nationally on ABC between March 28-April 1. The sophomore Tourism and Hospitality Management major, a self-proclaimed “huge fan” of the syndicated gameshow, couldn’t wait for his chance to rub elbows with hosts Pat Sajak and Vanna White.

“I just feel like it’s a dream,” said Velasquez, a native of Bethlehem, Pa. “I can’t believe I got the call that I’d been chosen. I still can’t believe I’ll be appearing on the show, trying to solve the puzzles. Right now, it’s exciting and nerve-wracking all at once.”

Velasquez had hoped to complete an in-person tryout for the show while on vacation in Los Angeles last summer. When his trip had come and gone, and he hadn’t heard from Wheel of Fortune representatives, Velasquez assumed his opportunity had passed.

“Then,” he said, “I received a call that changed everything.”

A producer notified Velasquez that he’d been picked for an October audition at The Westin Philadelphia, for Wheel’s annual College Road Trip Week, in which the show picks college students as its contestants. The first rounds of the audition gauged the energy of 60 prospective contestants as they called out letters, and tested their ability to complete written exams of practice puzzles. Velasquez advanced to the third round, where 15 contestants simulated spinning the wheel and introducing themselves to a contestant search team.

Two weeks later, Velasquez received a letter that he’d made the cut and would participate in a taping of the show.

“I’ll put it this way – not only was that letter unexpected, but I don’t think I’ve ever before been that excited in my life,” he said.

Velasquez is a member of two professional organizations at STHM: the Hospitality Sales and Marketing Association–International (HSMAI) and the American Hotel and Lodging Association (AHLA). His professional interests lie in event planning and destination management.

“I think I’d like to establish a career in LA, so the taping of the show will allow me another chance to visit a great city,” he said, “and make one of my biggest dreams become a reality.”