STHM undergraduate marching to the beat of his drum 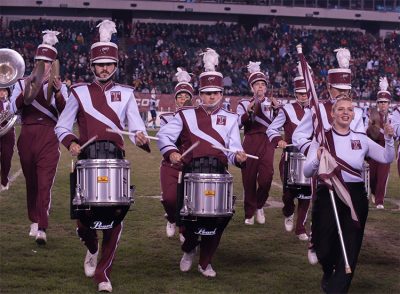 When the top-ranked team in men’s college basketball visited Temple University in February, Ryan Amodei said he “had the best seat in the house.”

That was the case in December, too, when Temple’s football team played in the Boca Raton Bowl.

Amodei is a member of the drumline for Temple University Bands. The sophomore plays in the marching band during football season and, for men’s and women’s basketball season, he sits courtside behind the drumset.

The Sport and Recreation Management major at STHM has auditioned for the marching band in each of his two years at Temple. This is his first year as a member of the basketball band, traveling to the women’s American Athletic Conference tournament in Uncasville, Conn.

“Playing in both bands has given me incredible insight into college athletics and the operations related to it,” said Amodei, of the crossover between his prospective career path and his passion for music. “Because we arrive at the Liacouras Center and Lincoln Financial Field so early, we’re there before everyone else arrives. It’s exposed me to a side of college athletics that I’d never seen before.” 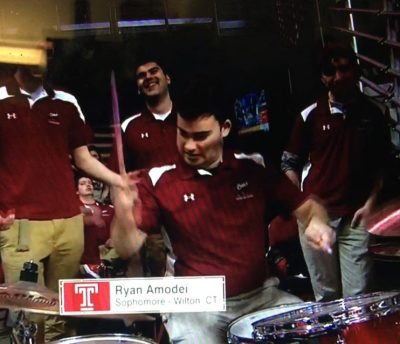 A native of Wilton, Conn., Amodei has experienced a handful of high points during his tenure with Temple University Bands. He performed live on ESPN’s “SportsCenter,” when Temple alumnus and ESPN anchor Kevin Negandhi, SMC ’98, broadcast the sports-highlight show from Temple’s campus. His drumming made its way to ESPN’s airwaves again, and on the same day, when he and the band traveled to Independence Mall for “College GameDay,” prior to Temple’s Oct. 31 football game against Notre Dame.

“There are so many fun perks that come along with playing in the band,” Amodei said.

That’s why it wasn’t a total loss when top-ranked Villanova defeated Temple’s men’s basketball team Feb. 17 at the Liacouras Center. That night, ESPN featured Amodei during its broadcast of the game, with an infographic of his name, major, and hometown appearing on the screen.

“Ryan is the emotional leader for this drumline, and his passion is infectious,” said Troy Gillespie, one of Temple Bands’ drum majors, and a senior Management Information Systems major from the Fox School of Business.

Amodei, who took up the drums in the fifth grade, said Temple University Bands provide an unparalleled college experience. While marching band is regimented, from its sheet music to its choreographed on-field performances, basketball band is “all improvisation,” he said, and “allows the drummers to respond to what we’re hearing from the rest of the band.” 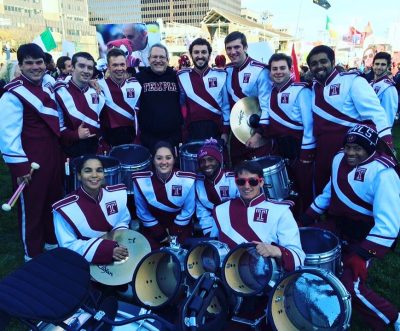 “It’s great for me to see students like Ryan who are not music majors who want to continue performing,” said Dr. Matthew Brunner, Assistant Professor of Instrumental Music at Temple’s Boyer College of Music and Dance, and Director of Athletic Bands. “That shows they had a great music education that stressed music is something enjoyable and can last a lifetime, no matter what career path they choose. The band here is a great outlet for our students to develop leadership and interpersonal skills, while being a part of something that supports the entire university, provides a constructive outlet beyond their daily grind, and – most importantly – is a lot of fun.”

Speaking of fun, Amodei said the band has had two big hits on its playlist: Walk The Moon’s “Shut Up and Dance” and Ariana Grande’s “Bang Bang.”

“I hope we get to play both deep into March,” said Amodei, hinting at lengthy NCAA tournament runs by the men’s and women’s basketball teams.