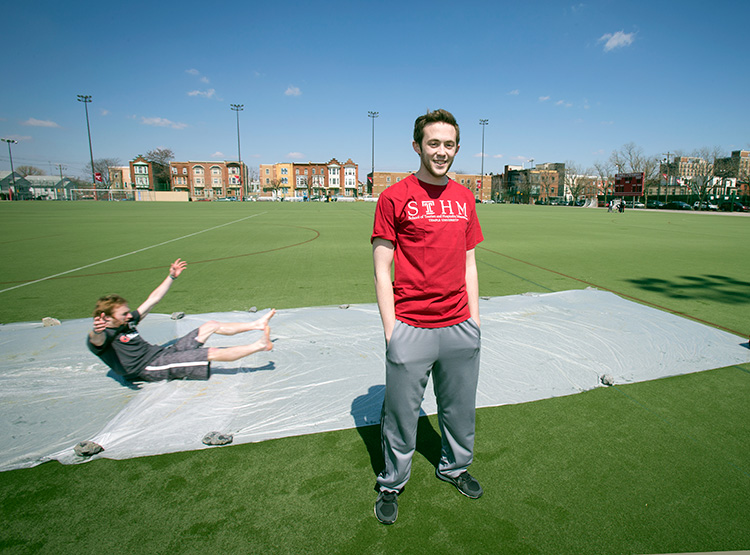 STHM student Benjamin Baker and his team entered the Guinness Book of World Records in 2015.

Benjamin Baker put a charitable twist on sliding into the Guinness Book of World Records.

An undergraduate at Temple University’s School of Tourism and Hospitality Management (STHM), Baker and a group of friends made the Guinness Book of World Records for the most distance covered on a Slip ‘N Slide within one hour.

He and a team of students from Messiah College, known as the Night Razors, broke the record in May 2015, at Camp Conquest in Denver, Pa. The group, with the help of 70 participants and the cheering support of 130 onlookers, covered 33.34 miles in 60 minutes, shattering the previous record of 7.34 miles.

The group owns another Guinness Record, for most distance traveled on a Razor Scooter in a span of 24 hours, having covered 344 miles.

In both record-breaking attempts, the group raised proceeds for a life-saving cause. All proceeds benefited The Living Legacy Foundation of Maryland, to which Baker has a personal link.

“I have a story a lot of people don’t,” said Baker, 20, a liver transplant recipient and cancer survivor.

Baker and the Night Razors have raised more than $12,000 during their Guinness attempts.

“This year’s record was not the biggest success financially, but we achieved massive success with publicity,” said Baker, whose story was featured on the cover of the April 22 edition of the Philadelphia Daily News. “We’ve begun our plans for next year, in order to ramp up the giving, and we’ve already filed our application to the Guinness Book of World Records.” 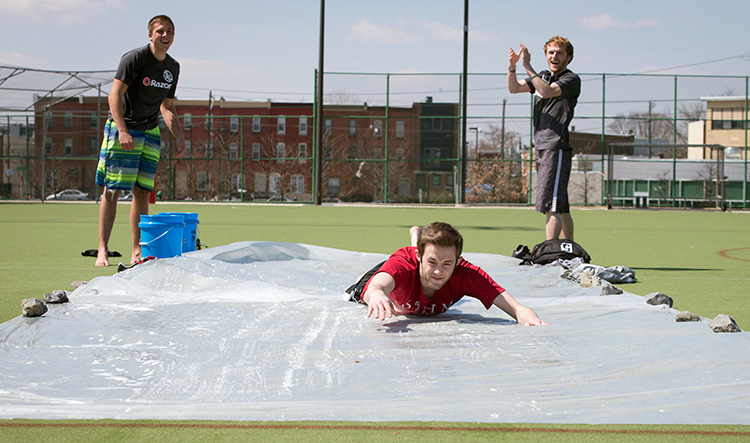 A Lancaster, Pa., native, Baker was a third-grade student who was to have his tonsils extracted. He underwent a routine blood test that yielded abnormal results. Doctors monitored issues in Baker’s liver and spleen for years, prescribing him “22 pills a day,” he said.

In May 2013, then in high school, Baker suffered liver failure. Due to his young age and the severity of his organ failure, Baker was rushed to the top of a donor list that usually requires a three-year wait. With the help of the Living Legacy Foundation, which helped identify a donor match, Baker underwent a transplant procedure only two months after his diagnosis.

Following a 13-hour, complication-free surgery at Johns Hopkins University Hospital, Baker was told he was the second-fastest patient ever to be discharged following a transplant surgery.

“I had a clean bill of health until the cancer came,” Baker said.

In May 2014, Baker – then a student at Messiah – experienced stomach pains. Doctors determined, after a colonoscopy and blood tests, that Baker had PTLD, or posttransplant lymphoproliferative disease. According to Baker, it’s a type of cancer that’s specific to solid organ transplant recipients and presents itself in the body’s B-cells.

“Only four physicians have ever studied it, and one was my doctor at Johns Hopkins,” Baker said. “They said it stemmed from the anti-rejection medicine I was taking after the transplant. Doctors told me that 1 percent of transplant patients get (PTLD), and .01 percent of average people get it.”

Injection treatments have kept the cancer in check, said Baker, who is in remission. Reaching May 2016 without any complications would mean that he has beaten cancer.

“I have this invincible attitude, which can be good and bad,” said Baker, who is studying Hospitality Management at STHM. “I wear my heart on my sleeve because, when you’re me, you don’t have time to hold anything back. Life is too valuable to hold back. You come to me with an idea, I’m probably going to say, ‘Let’s get it going.’”

Baker first used his take-charge spirit at Messiah, where he found like-minded friends who had penchants for riding Razor Scooters after dark. Naturally, they arrived at their name, the Night Razors. Considering Baker’s background, the group concocted an idea to attempt a Guinness World Record attempt for the most distance traveled on a scooter in one day’s time. As a result of their fundraising efforts, the Night Razors handed over a check for $6,900 to The Living Legacy Foundation.

“Event planning and event leadership are critical facets to our curriculum,” said Dr. Elizabeth Barber, STHM Associate Dean, “and it’s clear that Ben, through his charitable drives and record-breaking attempts, is getting hands-on experience in these venues. Ben’s story is truly inspiring.”

Said Baker: “My friends and I are raising money and giving back, and that’s what we’re all about. I used to look at cancer in this morbid light, like, ‘Is this the end?’ And what if it was? I wanted to make sure I did something charitable and memorable. With the Slip ‘N Slide record, it’s the same thing.”