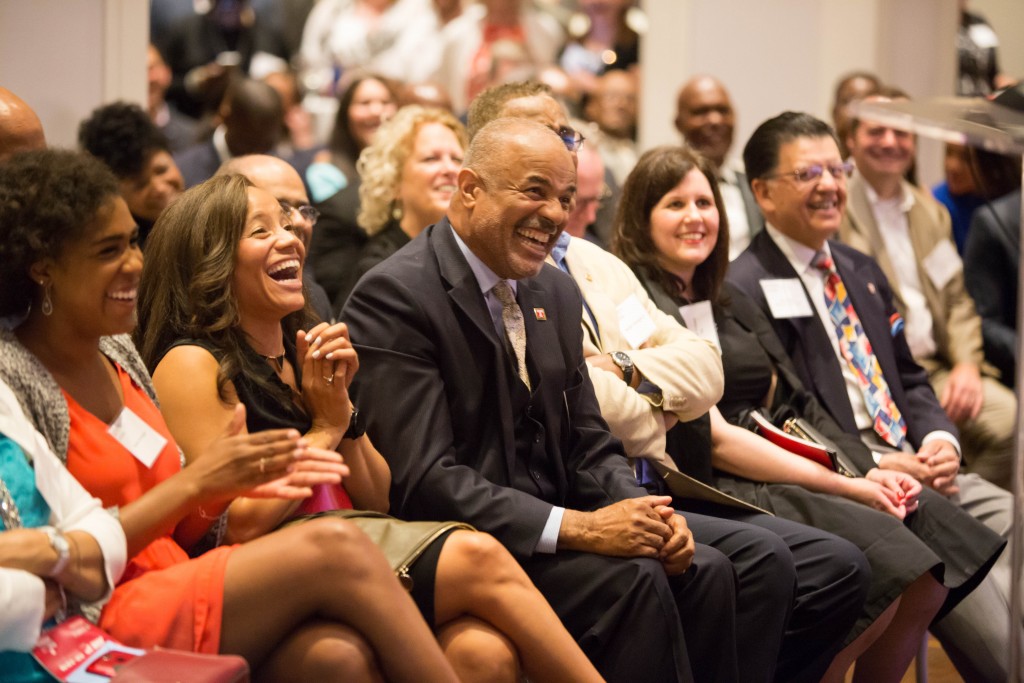 Associate Vice Dean Jeffrey Montague lets out a laugh while listening to a speaker during his Roast and Toast.

Graduates from Temple University’s School of Sport, Tourism, and Hospitality Management (STHM) drove from as far away as Connecticut, New York, and Washington, D.C. Some even hopped flights from California and the United Kingdom.

This, they said, was a can’t-miss event.

STHM honored Montague, its retiring Associate Vice Dean and longtime instructor, in a Roast and Toast held June 3. More than 250 people packed a ballroom in Philadelphia’s Hotel Monaco to recall favorite memories and share a few moments with Montague, the affable administrator who is renowned for having forged professional and personal bonds with countless STHM students.

A number of them arrived to put a comical spin on their relationships with Montague, while others shared touching stories of how the beloved educator inspired students to reach beyond their potential in the pursuit of greatness. No one – from those dancing in their seats to those wearing permanent smile – left disappointed.

“In higher education, we use citations of their work as the bar for determining the success of researchers,” said Dr. M. Moshe Porat, STHM Dean. “Look around the room and count all of Jeffrey’s citations. Look at everyone who has achieved something truly special because of his guiding influence. That is his legacy. I can’t tell you how many letters I’ve received throughout my career about the difference Jeffrey has made in the lives of his students.”

Montague, who retired in March as STHM’s Associate Vice Dean, plans to stay on as an adjunct instructor of the Senior Professional Development Seminar capstone course he founded. He joined STHM when the school was founded in 1998, after having served since 1988 within Temple’s now-shuttered College of Health, Physical Education, Recreation, and Dance (HPERD).

Lou Holder, M.Ed. ’99, who served as the event’s master of ceremonies, told attendees that Montague “was there for me when I wanted to quit everything.” Holder credited Montague with the inspiration to continue working toward his goal of becoming a sports broadcaster. The result, said Holder: “I love Jeffrey Montague with the brotherly love for which this city is known.”

In his next breath, Holder playfully chided Montague as having been “photographed more often than Michael Jackson.”

The jokes at Montague’s expense continued throughout the evening.

Tyrone Holt, BS ‘10, recounted a story in which he contacted Montague in his first days on campus, when Holt was in need of career guidance. After their meeting, Holt said he was even more perplexed about his future, having spoken to Montague on topics ranging from his education to the music industry. “I wasn’t sure if I should continue school or make a mix-tape,” Holt said to applause.

“If not for (Montague), none of us would have crossed that stage at graduation,” said Giovanna Slaughter, BS ‘06, who capped her roast with a reminder of Montague’s influence. “He put his foot down and knew you were going to make it. He believed in us when we didn’t believe in ourselves.”

Said Eliza Stasi, BS ’08: “Montague is on another level. When you needed support, or to be challenged, he was there.”

“Jeffrey Montague has been a link to the success of our school and our students since Day 1,” said Dr. Elizabeth H. Barber, one of Montague’s longest colleagues and outgoing STHM Associate Dean. “Our goal was to hold an event and create a scholarship that were befitting of his legacy, and I believe we did just that.”

The Guest of Honor took his time getting to the podium. And when Montague arrived there, he paused for a moment to collect his thoughts. What was there to say? Humbled by the presence of family, friends, and colleagues and students both past and present, he found the right message.

“I could talk forever, but I’m not teaching Senior Seminar right now,” Montague said, grinning widely. “Thank you, everyone. I sincerely love you.”