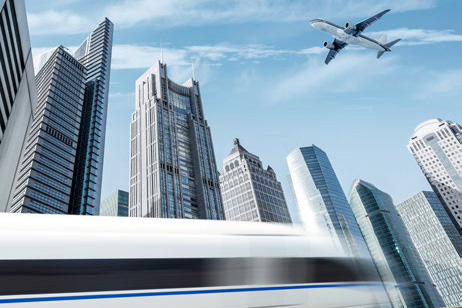 Think about traveling to another city as a tourist. Depending on distance covered, you probably would want to travel via air. And then once you land, you might want to find a train to reach your hotel or explore the local sights, right?

Over the past year, STHM’s Dr. Yang Yang conducted a study on the effect of air and rail transport connectivity and accessibility on domestic tourism in 343 Chinese cities. And he admits he was surprised by some of his findings.

The biggest surprise? For many Chinese tourists, airplanes and rail travel often were not complementary, but instead viewed as distinct competitors. In other words, people may choose to either book flights or take trains during vacation — but not utilize both options.

“A lot of the interesting insight we found is the intra-competition between air and rail,” said Yang, an Assistant Professor of Tourism and Hospitality Management.

Yang, who spent his formative years China, acknowledges this discovery doesn’t necessarily mean there should be fewer available trains, which are still an important part of the Chinese lifestyle. But looking only from a tourist’s perspective, he said it wouldn’t be smart “to duplicate your construction” when developing infrastructure between cities because “just focusing on one is simple enough.” This is particularly true of high-speed rail, which he noted was designed more for business travelers and can be too expensive for tourists simply trying to get around.

“If you’re going to focus on the number of tourists,” he said, “establishing high-speed rail is not that smart.”

Based on his research, which was completed with a collaborator in China and is currently under review for publication in the Journal of Travel Research, Yang concluded that constructing an airport or
train station is only the first step of infrastructure and that the second step should include leveraging that construction with more dedicated railway routes to “boost tourism,” he said. And he also noted that air travel remains “very important” for tourists traveling long distances.

As for the above two points, the professor believes both are applicable in the United States, where he plans to conduct a similar study in 2017. But when he conducts that research, he believes there will be a few
big differences.

“What is transferrable? What is not? In the U.S., there are a lot of self-driving tourists,” Yang said. “Tourist-wise, I think for China, they are more reliant on public transport.”

That difference, Yang added, has only become more pronounced in recent years with the emergence of Uber and other ride-sharing apps. Part of Yang’s research will focus on Uber and the vacation rental service Airbnb.

“I would be surprised if it will be similar,” he concluded. “I think trains play a much-less significant role here. I don’t think a lot of American leisure travelers are taking trains.”