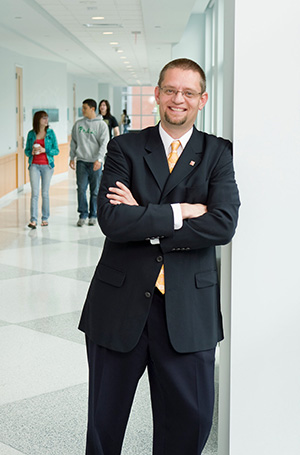 The award, the highest service honor within NASSM, recognizes a member with outstanding dedication to the promotion and growth of the sport management industry. Kent, a NASSM member for more than 20 years, credited the organization for providing him with exceptional mentors, including Paton, for whom the award is named.

“Garth was one of my mentors and a dear, dear man. It is special to receive this honor,” said Kent, Professor of Sport Management at STHM.

Kent’s commitment to the NASSM is strong. A past president of the organization, he helped establish the Janet B. Parks NASSM Research Grant, awarded at NASSM’s annual conference, as well as the Commission of Sport Management Association (COSMA) inaugural board of directors, which is dedicated to sport management education at the collegiate level.

Kent received the NASSM Student Research Award five years after joining the organization as a graduate student at Canada’s University of Windsor. In deepening his NASSM involvement, he served on several student committees and, in 2006, was recognized as a Research Fellow. He followed up that recognition with a highly successful stint as an Executive Board Member-at-large, which included several chairpersonships across various committees.

During his tenure, Kent has served on the editorial board for NASSM’s Journal of Sport Management, the leading academic journal in the field. He also has published more than 10 peer-reviewed articles within the journal.

Kent will receive the Paton Award this June at the 2016 NASSM conference, to be held in Orlando, Fla.