Home > News & Stories > In the News > STHM graduate student driven to succeed in classroom, on track

STHM graduate student driven to succeed in classroom, on track 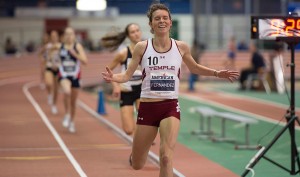 For Blanca Fernandez, moving to the United States seemed like something out of a movie script.

The 23-year-old left her hometown of Leon, Spain, in January to enroll at Temple University’s School of Tourism and Hospitality Management (STHM), where she’s pursuing her Master of Science in Sport Business degree. She made the cross-continental move with only vague notions of the U.S. gleaned from movies she had seen.

Finding success at STHM and with the women’s track and field team at Temple, however, has made Fernandez realize that silver-screen dreams sometimes do come true.

Since her arrival at Temple, Fernandez has become the first woman in 28 years to qualify for the NCAA Indoor Track & Field Championships, where her mile time, 4:42.17, was only four seconds shy of qualifying for the championship. She has gone on to receive outstanding commendations for her 3,000-meter run, finishing in 9:16.24. She has broken two school records and, at the American Athletic Conference Indoor Championships last February, earned two first-place finishes. During the outdoor season, she again became the first woman in 28 years to advance to the NCAA Outdoor Track & Field Championships. There, she broke the program record for the third time this season with her performance in the 1500-meter semifinal heat.

“I’ve run track for 10 years, so I’m not new (to the sport),” Fernandez said. “I was uncoordinated as a kid, and running was all I could do.”

Fernandez said she’s driven by the opportunities that will be afforded to her in attaining her STHM graduate degree. The first of her four siblings to even consider a move to America, Fernandez said doing so was critical to a future career in sport business. Here, she said, the sport industry is more in the mainstream. As an undergraduate student at the University of Leon, she studied physical activity, but found the university’s emphasis on a career in physical education to be stifling.

“They teach you how to teach,” Fernandez said of her undergraduate education. “The dream of everybody in Europe is to study American athletics.”

Fernandez scouted colleges and universities that would provide an opportunity to train athletically, while also broadening her view of sport business. Fernandez said she was drawn to STHM’s reputation as one of the top recreation management and sport business programs in the United States. 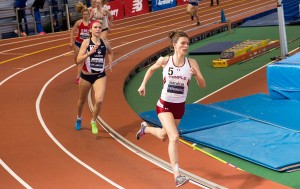 While focused on passing the English exams required for admission, Fernandez waited an additional semester to solidify her grasp of the language. Fernandez, whose mother is an English teacher, joined STHM’s graduate program in January. (She said her biggest challenge remains adapting to entire lectures in her second language.)

Despite what she called a “crazy first few months” while adapting to English, she credited her teammates and coach with expanding her vocabulary. Fernandez said her daily interactions with the track and field team have helped her experience Philadelphia.

While studying to attain her graduate degree from STHM, Fernandez hopes her competitive spirit will help her attain a spot with the Spanish National Team for the 2016 Summer Olympic Games.

“Next year is real,” Fernandez said, “and I just hope everything goes well.”

After all, everyone loves a happy ending.