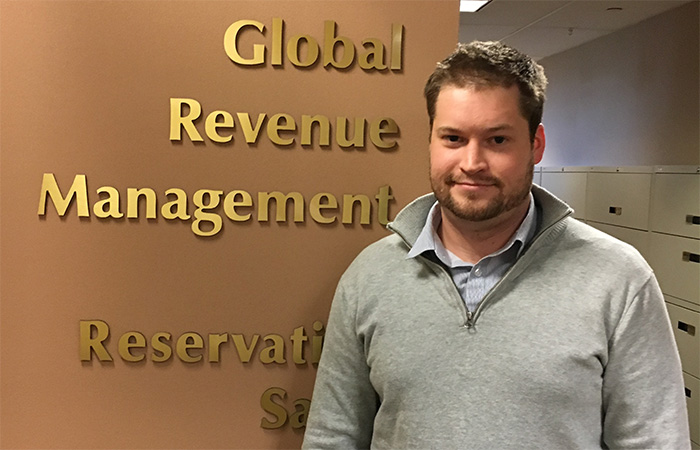 From weather reports to industry trends, Sean Nealis knows that even the most-subtle changes can shift business in the hotel industry.

Nealis, an alumnus of Temple University’s School of Sport, Tourism and Hospitality Management (STHM), serves as the revenue manager for Marriott International. In two short years after relocating to Washington, D.C. for an internship, Nealis has worked his way to Marriott’s corporate headquarters in Bethesda, Md.

And it wasn’t until his Senior Professional Development Seminar class at STHM that Nealis’ interest in revenue management had first been piqued. By using a virtual reality hotel program and visits to different hotels during the STHM capstone course, Nealis realized the career was an appropriate fit.

In that same course, Nealis first heard about Marriott’s Voyage Global Leadership Development Program, which allows for recent university graduates to explore a number of potential career paths in hotels. He moved to Washington and began as a rooms operation voyager, and then transitioned into a role as a front-desk manager.

“I got so much hands-on work and experience,” said Nealis, a 2014 alumnus. “I developed a lot while I was in that program.”

Since Marriott International’s merge in 2015 with Starwood Hotels and Resorts Worldwide, Nealis says that it’s an exciting time to be there.

“A lot is happening,” he said excitedly. “I’m in the middle of everything. Some of the smartest minds are sitting in the same room as you when you’re eating lunch.”

In his current role, Nealis is in charge of 12 different hotels on the East Coast, located between Syracuse, N.Y., and Boston. He keeps up on market trends and the different regional events in order to remain competitive in a crowded marketplace. He said he balances the fine line of being too aggressive, yet making sure the hotel is prepared for anything.

Even an unforeseen weather incident.

“Something as small as a rainstorm could bring in an extra 100 rooms,” he said. “Concerts, football games, airport delays all affect things,” Nealis said.

The Temple alum has worked with his two mentors, Justin Gibson and Jim Ceh, since first joining the Voyager program. He has learned from them for several years and has made several connections using their expertise.

Nealis advises students to explore their options before moving forward with an internship right away. “It’s stressful! I was looking into internships early on and didn’t move forward with it right away. Waiting was a risk, but it paid off for me,” he shared.

Nealis plans on moving forward within corporate headquarters. He wants to continue to explore full service hotel management and is excited for his future career growth within the Marriott Company.