STHM Alumni Recognized as the Next Generation of Tourism Leaders 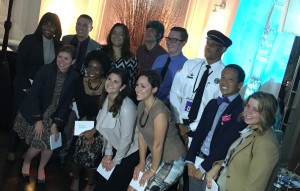 Five alumni of the School of Sport, Tourism and Hospitality Management (STHM) at Temple University were among 14 individuals named innovators of Philadelphia’s booming tourism industry in Billy Penn’s “Who’s Next in Tourism.” The “Who’s Next” series highlights the most dynamic individuals under 40 shaping Philadelphia with the ultimate goal of identifying and tracking the next generation of leaders and influencers.

Beginning her career at Temple as a pre-med student, Brittany Benjamin, BS ’15, decided to shift gears entirely and pursue a career in tourism. She landed an internship with the Philadelphia Convention & Visitors Bureau (PHLCVB) during her time at STHM, which led to a full-time position upon graduation. Benjamin currently serves as the PHLDiversity Coordinator at PHLCVB, where she aims to highlight the city’s diversity and charm on a global scale. “We have history, we have diversity, it’s easy to access and get around. Philly is working its way up,” she said to Billy Penn.

Another honoree representing both STHM and PHLCVB is Chris Petrucci, BS ’12. A non-native of Philadelphia, Petrucci developed a strong love for his adopted city after coming here for college. He works as a Business Development Manager for PHLCVB, where he also held his first internship. Previously, Petrucci held positions at Liberty Travel and Le Meridien, giving him a variety of different skillsets and experiences within the industry.

Jamie Cooperstein, MTHM ’12, began her career as a concierge at the Rittenhouse Hotel in 2004. After gaining 10 years of insightful experience at hotels in the region, she decided to shift her focus to teaching and launched her own firm, J. Cooperstein Hospitality Consulting, LLC. She provides her clients with the training and knowledge necessary to understand best practices when it comes to customer service. Additionally, Cooperstein is an adjunct professor at Drexel University and Delaware County Community College.

STHM alumnus and former student body president of Temple University, Nick Pytel, BS ’01, has experience in the industry on a global scale. He worked for LRA, an international quality assurance firm, where he refined establishments in Europe, Canada, New Zealand, Asia and Australia. A lover of Philadelphia, Pytel returned from his international travels to work for the Pennsylvania Horticultural Society, beginning as a ticket sales manager for the Philadelphia Flower Show. Pytel grew with the organization to his current role as Associate Director of Business Development. “I’ve seen most of the world and Philly has everything,” said Pytel.

The first experience Carol Watson, BS ’02, had in the tourism industry dates back to her time as an intern while in STHM. From working the front desk, Watson’s career flourished upon graduation as she took a position at the Hyatt at the Bellevue. With this experience under her belt, she was able to assist with the opening of the Kimpton Hotel Palomar in 2009. After working at another Kimpton property in Philadelphia, Watson returned to Palomar as the General Manager in 2016.

These alumni were honored at the Who’s Next in Tourism networking event at XIX (Nineteen) where they were joined by STHM faculty and staff to celebrate their hard work and success.