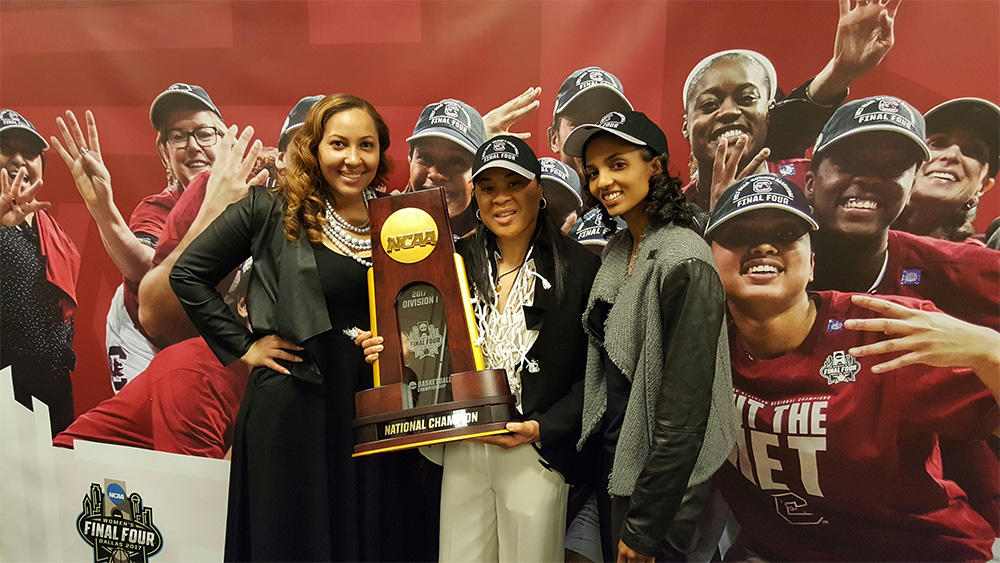 For Cynthia Jordan and Ari Moore, winning a national championship has always been the goal. It’s just that neither figured they would require 17 years to accomplish it.

“To witness a day like (April 2), and winning the national championship, it puts everything into perspective,” said Jordan, South Carolina’s Director of Basketball Operations.

“It’s what you work your entire life to achieve,” added Moore, Special Assistant to the Head Coach.

Jordan and Moore have known Staley since 2000. The duo signed national letters of intent to comprise Staley’s inaugural recruiting class at Temple, where she served as head coach for eight seasons. Jordan and Moore played for Staley at Temple from 2001-05.

Today, they are critical components to Staley’s operations in Columbia, S.C., and applying their Temple educations on a daily basis. Jordan earned her Bachelor of Business Administration in Marketing from the Fox School of Business, and a Master of Science in Sport Business from the School of Sport, Tourism and Hospitality Management (STHM). Moore graduated from STHM with a Bachelor of Science in Sport and Recreation Management.

To them, education has served as their professional foundation.

In her role, Jordan coordinates team activities and all aspects of its travel arrangements, and works directly with players to keep them academically stable. She previously worked for Staley as video coordinator at Temple, from 2007-08, and in a similar capacity for two seasons at South Carolina.

“Fox was tremendous,” said Jordan, a native of Chesapeake, Va. “It provided me with the opportunity to meet people from all walks of life, and the skills to make decisions regarding pricing, market demand, and negotiation. STHM helped to extend that knowledge base.”

“STHM gave me the foundation to excel,” said Moore, who hails from Cleveland. “I’ll never forget the Senior Seminar (professional development) capstone because of the nature of my job. Working in sports, it lends itself to fun and excitement. What I learned at STHM was to have fun, but pay attention to the details and get the job done.”

A week after South Carolina won its first NCAA championship in program history, the team celebrated once again with a parade through Columbia. Jordan and Moore had come a few wins short of a national title during their playing careers at Temple, which made for a sweet moment that each relished this time around.

Both agreed that they would not be in their current positions without Staley or Temple University.

“As a hard-headed 18-year-old player, I didn’t understand or appreciate what I know right now,” said Moore, the mother of two young children. “(Staley) helped me mature into a professional woman, and that wouldn’t have happened unless I followed her to Temple for my college career.”

Said Jordan: “I’m fortunate to have played at Temple for Coach, who I’ve known half of my life. Words can’t describe what all of this means to me.”