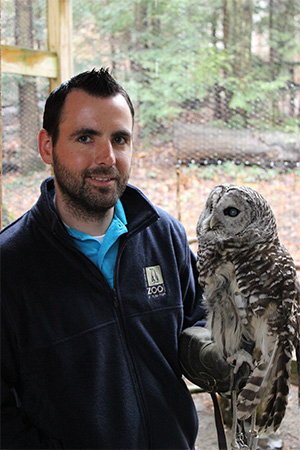 A 2010 graduate of Temple University’s School of Tourism and Hospitality Management, Rice is the marketing and special-events coordinator at the Binghamton Zoo at Ross Park in Binghamton, N.Y. Binghamton Zoo is the fifth-oldest zoo in the country, and as a small non-profit, it allows Rice to get up close and personal with the animals he represents.

A native of Vestal, N.Y., Rice came to STHM on the strength of its Bachelor of Science degree in Sport and Recreation Management program, and to Philadelphia on its sterling reputation in the sport industry. While at STHM, he interned for the Binghamton Mets, a minor-league baseball team, and the NHL’s Philadelphia Flyers, before joining the zoo.

“I didn’t know in college that working for a small nonprofit would be where I wanted to go, but the experience has been great,” Rice said. “It’s better than being a number or a name on a sheet. I get to work closely with everyone in the organization.”

Rice began with the Binghamton Zoo in May 2011 as a seasonal employee, learning the ropes during the zoo’s busy summer months. He quickly advanced through the ranks to become the assistant marketing and special events coordinator, before assuming his current position. His everyday responsibilities to the zoo require him to call upon the marketing and event coordination skills he gleaned from his time at STHM, where he graduated with honors, and his nascent talents in Photoshop and web design. Working closely with the zoo’s media team, Rice is the force behind advertisements for events like the Ice Cream Safari, and the Feast with the Beasts food and wine event.

“It’s fun that what I’m promoting is not only cute animals, but education on their threatened statuses in the wild,” Rice explained. “We’re a small nonprofit, so can we donate lots of money to global conservation projects like bigger zoos? No, but we can give people experiences and try to educate them as best as possible.”

With around 60,000 visitors yearly, Rice advertises the zoo’s attractions the way he would for a sporting event. He organizes giveaways, partnerships, and adult-only beer garden events to expand the zoo’s market reach. He also highlights the zoo’s role in species survival and breeding, featuring the endangered animals the zoo protects and emphasizing its dedication to wildlife conservation.

“I took a seasonal job and didn’t realize I’d be here five years later,” Rice said. “But your passion and dedication grows. I learn something new every day.”