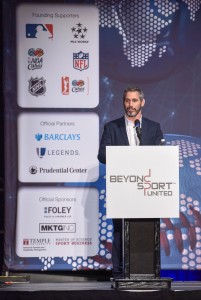 Beyond Sport founder Nick Keller speaks from the podium during the Beyond Sport United event, for which STHM served as the exclusive academic partner. (Getty Images)

The one-day event, titled Beyond Sport United, gathered more than 500 guests and speakers from a diverse array of sport and sport business roles to exchange ideas and explore a unique topic. The theme of this year’s event, held July 22 at Prudential Center, was the Power of the Athlete.

STHM is one of the largest providers of Sport and Recreation Management education in the United States, and is home to the nation’s No. 1-ranked Sport Management degree program.

“The School of Tourism and Hospitality Management is proud to align with Beyond Sport as its exclusive academic partner,” said STHM Associate Dean Dr. Elizabeth H. Barber. “Beyond Sport is widely regarded as a worldwide leader for its use of sport to not only promote social change, but also create it. It’s only fitting that STHM, a global leader in Sport Business education, should partner with such a renowned organization.” Dr. Aubrey Kent, STHM Professor and Chair, led a session on metrics being used to evaluate the financial efficiency of sport teams’ nonprofit charitable foundations. Michael Lahoud, a midfielder from the Philadelphia Union, of Major League Soccer, joined Kent to share his story as an athlete who uses his celebrity profile to create social change for good.

While representing different facets of sport, each speaker maintained a similar theme – the use of sport as a vehicle for continued education, acceptance, awareness, and impact.

Former WWE wrestler John Layfield assigned a value to education’s intersection with sport. Addressing attendees during an early-morning panel, Layfield – the founder of Beyond Rugby Bermuda – has used his athletic celebrity to introduce rugby to Bermuda, as a means of steering the island nation’s underprivileged youth from potential gang involvement. He shared a story of how one young man’s participation in rugby motivated him to turn a failing grade into a passing score.

“Young people are looking for someone to come home to, to tell how they did on a social studies test, or a math test,” Layfield said. “That’s the role that education can play in the development of a young person, particularly one who’s involved in sports.” 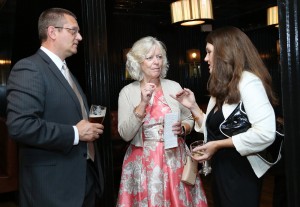 More than a dozen STHM alumni, working in various sectors of sport, attended the conference.

“The conference has me looking at the industry in a completely different way,” said Nicole Melfi, a client relationship specialist with the NHL’s New York Rangers, “and if not for STHM, I would not have attended, nor would I be employed in my current position.”

Added Jazmine Settles, an account executive with the NBA’s Brooklyn Nets, “Because of STHM, its tremendous reach, and its strong industry presence, I have access to any professional sports team in the United States. I am forever grateful for my undergraduate experience at STHM, and the opportunities the School continues to afford me as an alumna.”

Visit STHM’s website for more information on the Sport and Recreation Management programs at Temple University.