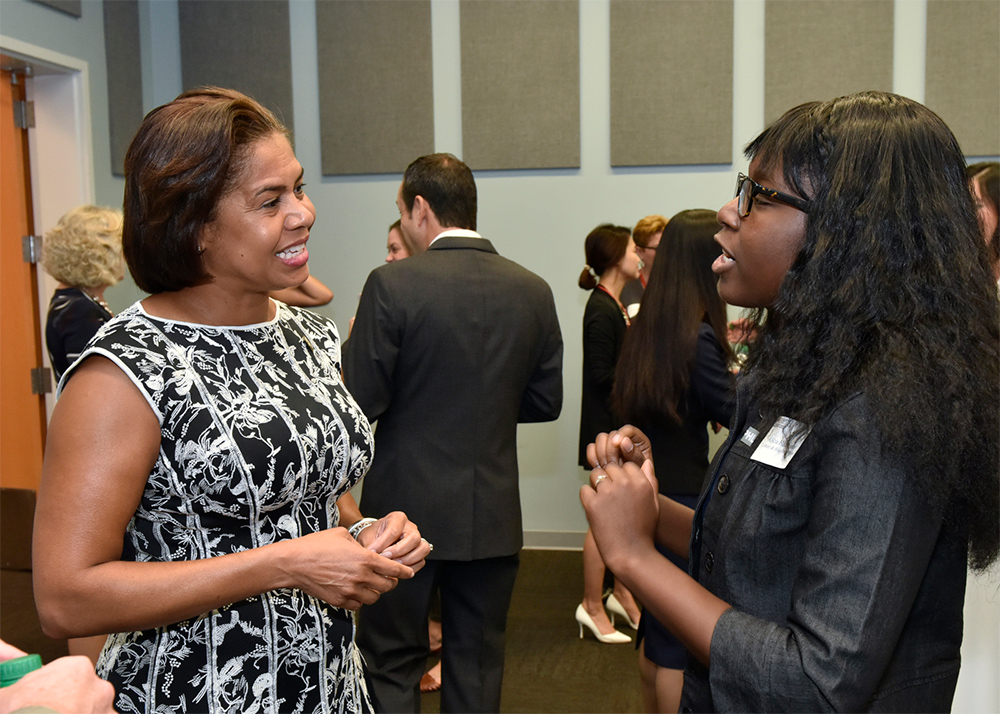 Click the photo above to view the full gallery. (All photos courtesy Jim Roese Photography.)

“Folks, we’re gonna have some fun here,” John McNichol began as he moderated the first Executive in Residence of the semester. After a grueling speed round of questions, Julie Coker Graham caved under pressure and revealed the best university in Philadelphia: Temple University.

On September 28, 2017, Julie Coker Graham, President and CEO of Philadelphia Convention and Visitors Bureau, spoke with over 200 students and alumni at the School of Sport, Tourism and Hospitality Management (STHM) during an hour-long discussion moderated by John McNichol, President and CEO of the Pennsylvania Convention Center Authority. Graham discussed an array of different topics such as Philadelphia hosting mega events and the benefits of getting a degree in hospitality.

“The fact that you are choosing to get a degree in hospitality management gives you an advantage,” Coker Graham shared with students. “Hospitality crosses so many different areas including hotels, restaurants, event planning, asset management… pursuing this degree will expose you to the wide-range of opportunities available to you.”

Coker Graham’s career in the hospitality industry began her senior year of high school when she was a waitress. From there, she received a bachelor of science in hospitality management from Johnson & Wales University and jumped right into Hyatt’s corporation training program upon graduation. Through her ability to move and adapt, she climbed her way up the ladder at Hyatt, ultimately becoming the General Manager for the Hyatt Regency Philadelphia at Penn’s Landing.

Today, Coker Graham serves as the President and CEO of Philadelphia Convention and Visitor’s Bureau. She is the first African-American woman to run the organization since it began 76 years ago.

“I’m honored to be in the role,” said Coker Graham. “It is a part of my process every day, but more importantly, I need to set a path for the folks behind me to take full advantage of.”

As she transitioned into her role as president, Coker Graham was welcomed with hosting three mega events in the city of Philadelphia: the World Meeting of Families, the Democratic National Convention and the NFL Draft.

“These mega events gave Philadelphia the opportunity to be presented on a global stage. It gave folks an opportunity to touch and feel parts of Philadelphia that they may have never seen before. That’s visibility that you can’t pay for,” Coker Graham commented on the success of the events.

This discussion is part of STHM’s Executive in Residence series, a program designed to expose students to professionals in the industry through personalized discussions and engagement.

Visit the Executive in Residence page to learn more about Julie Coker Graham and the ongoing speaker series.