Their bus trip ended when it had reached the National Football League Players Association (NFLPA) in the nation’s capital. But for members of one student professional organization at the School of Tourism and Hospitality Management (STHM), the networking possibilities are endless.

A few months back, Jacob Diefenthaler said he had shared a conversation with Mark Levin, the NFLPA’s Director of Salary Cap and Agent Administration. It wasn’t until a subsequent visit to LinkedIn that Diefenthaler, the Director of Professional Outreach for the Sport and Governance Association (SAGA), learned Levin was a Temple alumnus.

“I asked if he had interest in SAGA coming (to Washington, D.C.), and he said they would love to have us visit,” said Diefenthaler, a senior Sport and Recreation Management major at STHM. 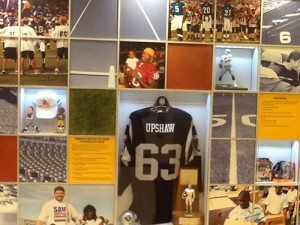 At the NFL Players Association, located in Washington, D.C., the halls and walls are decorated with memorabilia and photographs pertaining to the football league’s past and present. (Photo Credit: Jeffrey Montague)

Once the group had arrived at the NFLPA, the students headed to a facility’s boardroom, where the walls were decorated with authentic memorabilia and photographs of retired and current NFL players. Beforehand, the group had been told to expect three guest speakers, but Levin surprised them with two more with whom the STHM students had something in common.

Tyrone Allen and Zamir Cobb also attended Temple University. Allen, the NFLPA’s Director of the Professional Athletes Foundation, graduated from the College of Liberal Arts. And Cobb, a former Temple football player, earned his degree from the College of Public Health. Cobb is Program Manager of the Trust, which offers financial, lifestyle, health and professional resources to prepare players for life beyond their football careers.

“Three out of the five at the NFLPA from Temple is a pretty big deal,” Montague said.

The speakers specified the difference between the NFL and the NFLPA, the latter of which offers formal representation in collective bargaining negotiations with the league, represents the interests and rights of the players and beyond. Levin’s panelists covered everything from a hot-button topic like concussion awareness and treatment, to helping players get back on their feet following health and legal setbacks.

Atallah offered the students insight into actions taken by the NFLPA regarding Ray Rice. In September, the league issued Rice, the former Baltimore running back, an indefinite suspension following an incident of domestic violence. Atallah had been tasked with briefing the media on Rice’s rights as a player in his criminal case.

“We told our members the topic (of Rice) is on the table because that is their job (at the NFLPA), and it’s a good question to ask about, just as long as they ask it appropriately,” said Benjamin Goldman, a senior Sport and Recreation Management major and SAGA’s President. “I was very pleased with how professional our members were, as well as how Atallah explained how the NFLPA handled that particular situation and crisis control.”

During the visit, the students learned of the career opportunities offered by the NFLPA – and what the organization looks for when hiring interns and employees. Attaining a job there, Montague stressed, requires developing a vast background in contrasting business ventures at the undergraduate level.

“When I think about students coming to such an event, it’s really about trying to get them prepared for their future,” Montague said. “They really have to understand accounting, finance and business acumen in order to be a salary cap administrator or work in player affairs. I think those were the lessons that were the best part of the day, to inform students they can’t just say they want to be a sports agent and think it miraculously happens. They really have to put in a lot of work.”

As their three-hour visit wrapped up, SAGA’s members did not leave empty-handed. Levin and rest of the speaker panel, who gave Montague their sterling impressions of the students, extended an annual invite to the STHM organization.

“I am very glad starting SAGA has opened so many doors for us that we wouldn’t have known about otherwise,” said Goldman, one of SAGA’s founding members. “The future relationship we started with the NFLPA is going to be great. I’m very glad they are interested and that they reached out to us to continue the relationship.”

Montague and SAGA members invited three students from Saint Joseph’s University to join them for the trip, adding a hospitable component to the STHM business trip.

“We knew there was a sports marketing component at St. Joe’s, so we reached out to them to say, ‘Here’s what we’re doing. If you’re interested, come join us,’” Montague said, “and three of them said, ‘Sure.’

“So we let them into the STHM family.”

“We thought it would be a good idea to help brand us and expand to other schools,” Goldman said.