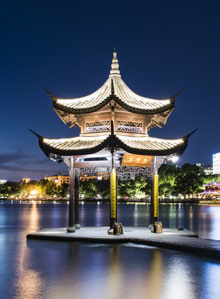 For the past year, STHM Professor Dr. Xiang (Robert) Li has been working to establish a research center. And now that it is off the ground, he believes that the newly created (and newly named) U.S.-Asia Center for Tourism & Hospitality Research is uniquely poised to emerge as a leader in its field.

A world-renowned expert in Asia tourism, Li arrived at Temple University in the fall of 2015 following a stint at the University of South Carolina. Soon after, the School approached him about opening a center — and, he said, “without any hesitation, I embraced the idea.” Li had led two research centers at his previous institution, but immediately recognized that one at Temple could have even greater potential.

For starters, he pointed out that Philadelphia is a great tourism destination — the first World Heritage City in the U.S. — that also happens to be located between two giants in New York City and Washington D.C. Secondly, Temple is a university with “tremendous momentum,” he said, and has the ability to create a talented multidisciplinary research team that includes PhD students and faculty fellows. And finally, of course, his experience and expertise will help the center achieve its specific goals of propelling STHM’s international presence while enhancing connections between government, industry, and other public entities in the American and Asian tourism and hospitality areas.

“We see great interest in a better understanding of each other and tourists,” Li said. “Asian businesses want to know more about American tourism markets and vice versa. That’s how we’ve positioned ourselves.”

Working with colleague and STHM Associate Professor Dr. Yang Yang, the center’s assistant director, Li and his team will research destination marketing, big data analytics, consumer profile analysis, yield and revenue management, and hospitality asset evaluation. And their research, they hope, will “build a bridge” between their findings and real-world practices while “developing a better understanding of industry needs and demands,” Li said.

They also hope to foster a better cultural understanding between Asian and American tourists, which, in turn, should greatly bolster outbound tourism to both sides.

“For instance, we’ve found the general population both in China and the U.S. may have some misperceptions of the other country,” said Li, who recently edited a special series for the Journal of Travel Research and published an editorial about emerging tourist markets. “But lots of people find our cultures are not that different. We are different as two countries — but, at the end of the day, people share a lot in common.”

Based on a past study he conducted, for example, Li noted that very few students think to study abroad in China but ones who do say “it changed their life” and would certainly return, Li said. Asked if he can fix that kind of misconception, Li admitted that
“to assume the center can do that singlehandedly would be a little bit naive. But I think the kind of research we’re conducting in the center will be instrumental in this area.”

Of course, it may be too soon to know all that the new center can accomplish.

Throughout February, Yang said he and Li had been “looking for collaboration, sending out proposals, inviting visiting scholars and organizing workshops,” among other early-stage tasks. Their ambition
to be a “leading braintrust that advances the development of the U.S. and Asian tourism and hospitality industries” is rooted in Li’s personal ambition to boil down wide-ranging research to the people who travel.

That’s why he got into tourism, first on the industry side and now as an academic.

“For me, travel is a people industry,” Li said. “I am a people person. I write a lot of academic papers. I play with numbers. But, ultimately, I like it because I like to interact with people — different types of people in different parts of the world.”