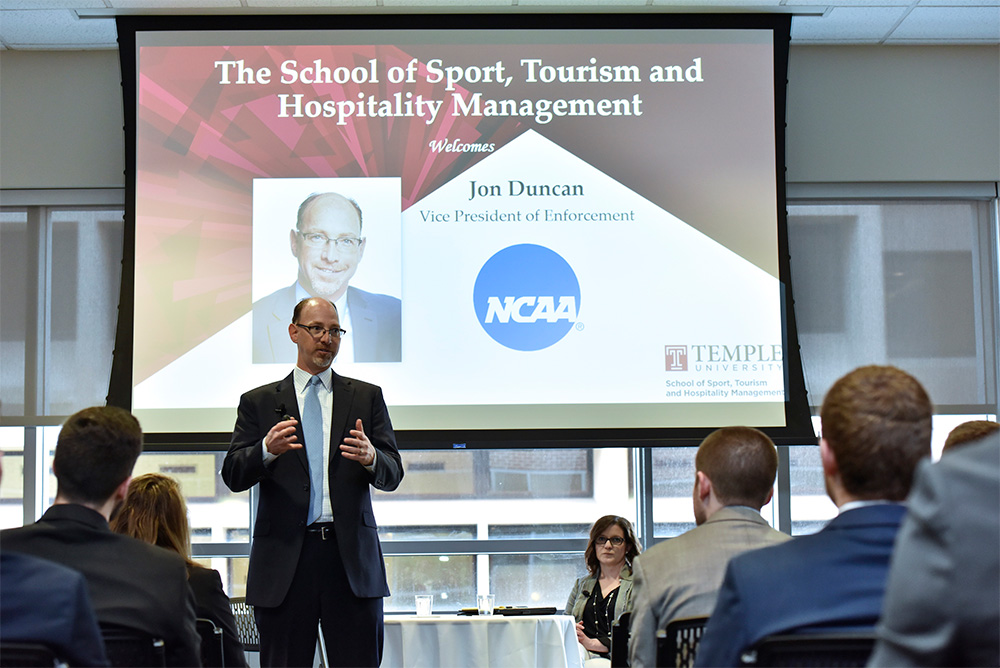 Jon Duncan is not the bad guy.

As the NCAA’s Vice President of Enforcement, Duncan does not write the association’s bylaws or issue its penalties. He does not target select institutions, or operate in secrecy. In a way, he said, he’s like a soccer referee. Duncan used that analogy during his presentation at Temple University, showing a photograph of men’s soccer players from two collegiate teams surrounding an official who was about to issue his judgment call.

“We’re not out to get you,” Duncan said, “but there is reason to believe that our allegations may change many people’s lives, and the trajectories of their respective universities and the next generation at those institutions.

Duncan spoke to students from Temple’s School of Sport, Tourism and Hospitality Management (STHM) during an April 13 visit. He served as Executive in Residence, an ongoing speaker series through which STHM invites accomplished business executives to campus to meet with students and impart upon them their industry expertise in the fields of sport, recreation, tourism, and hospitality management.

“Our goal is to bring executives of the highest caliber to you — to share their stories, and to make what we faculty members talk about in the classroom real for you as you prepare to launch your careers,” said Dr. Aubrey Kent, STHM Senior Associate Dean.

Duncan’s role — and that of his 56 colleagues in the NCAA’s Enforcement division —entails the enforcement of more than 5,800 bylaws across the NCAA’s Divisions I, II, and III, with more than 460,000 student-athletes, 1,100 member institutions, and 16,000 teams.

The infractions process, of which the Enforcement division is a part, Duncan said, focuses on three primary tenets: upholding integrity and fair play, prescribing fair and appropriate penalties, and ensuring member institutions are abiding the rules and are not disadvantaged by doing so. 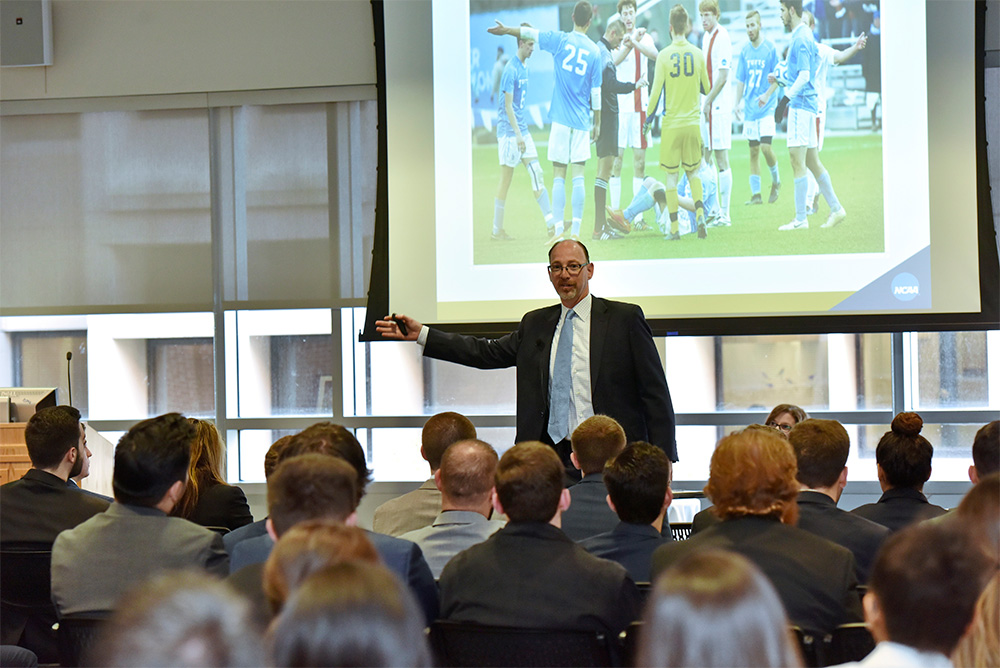 Many potential violations by member institutions are not processed as formal allegations and, subsequently, turned over to the NCAA’s Infractions committee because “our evidentiary standard is so high that only a small portion of cases render allegations,” Duncan said.

Recruiting and academic integrity violations account for a majority — close to 70 percent, he said — of the most-serious rule violations that are brought to his attention. The evolution of new technologies has changed the means by which people are inclined to bend the rules.

“But those same challenges with which my predecessors wrestled more than 20 years ago are the same ones we’re seeing today,” Duncan said.

Duncan quipped that “the old $100 handshake” occurs less frequently now, and that the introduction of other electronic currencies rule the day. Fortunately for Duncan and the NCAA’s Enforcement division, electronic mischief is easier to detect and trace. That’s similarly the case with academic-integrity violations.

“Players, coaches, and other administrators have not found a way to sanitize their electronic fingerprints,” Duncan said.

“While my role does not deal with the penalties levied against member institutions, I was pleased with the outcome, that there were no great disparities in the infractions that had been issued,” Duncan said.

“Jeremy and his team used a solid methodology for looking at something that nobody else has ever examined, that thoroughly or with that degree of precision. That’s a credit to this school (STHM) and this university.”