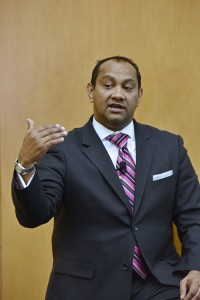 Salvador Mendoza paused his presentation ever so briefly, and then uttered four words that caused students to wriggle in their seats.

Mendoza, the Vice President of Diversity & Inclusion at NBCUniversal, asked the gathering of students from Temple University’s School of Tourism and Hospitality Management (STHM) to identify which of the two shapes visible on the projection screen was a square. Only one student raised his hand with an answer to Mendoza’s seemingly simple question.

“In my line of work, it’s not taboo to raise your hand and have an opinion,” Mendoza said. “You need to be the person who isn’t afraid to step up, say something to challenge the norm, and do what is right for the greater good of your constituents.”

Mendoza visited Temple University Oct. 2 as part of STHM’s ongoing Executive in Residence series, which bridges the gap between accomplished business executives and STHM’s students in tourism, hospitality, sport, and recreation management. Executive Director of the PHLDiversity Multicultural Affairs Congress Greg DeShields served as the moderator of Mendoza’s presentation and subsequent question-and-answer session.
In his role with NBCUniversal, Mendoza is responsible for the development of long-term strategies in the areas of workforce, community investment, and management of the company’s employee resource groups. He places a focus on enhancing the company’s diverse and inclusive environment. 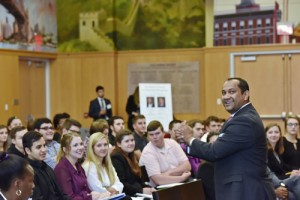 For Mendoza, these comprise an easy proposition. The Honduran-born Mendoza said he could relate to underrepresented communities. He moved to the United States as a 14-year-old boy – “one of the dreamers, when the term was unknown” he said, making reference to a faction of the American population that, as a result of immigration status, left him unqualified for Federal Student Aid.

“When you work hard, over time, you can achieve greatness,” said Mendoza, who earned his U.S. citizenship while pursuing his undergraduate degree at Chicago State University. “It’s like a baseball player who practices his swing over and over again. In what I do, as it applies to diversity and inclusion, there’s always work to be done toward being more representative of all cultures and all people without even thinking twice about it. It will eventually seem automatic, like that baseball swing.”

NBCUniversal, Mendoza said, is a leader in this arena. He said NBC was the first major American television network to cast a black actress in the lead role of a primetime comedy show, or as the host of a primetime variety show. NBC also was groundbreaking in its televising of the first made-for-TV movie about the AIDS epidemic, Mendoza said.

“The greatest challenge facing a company like NBCUniversal is building long-term relationships with the community you represent,” he said. “We are an entertainment, film, and news company in an industry that’s constantly evolving. You cannot let contentment stand in your way. We need to be authentic.”

As an example, Mendoza recalled the once-widespread use of the term “illegal alien” on national television broadcasts across all American networks. The term, he said, gives off “an instantly negative connotation.”

“I’ll never forget turning on NBC Nightly News, then CNBC, then MSNBC, and hearing the term ‘undocumented immigrant,’” Mendoza said. “It was such a proud moment to be part of a company that made the decision to start changing the conversation. This scenario demonstrates that there’s always work to be done, not only in how we deliver the news, but also in how we view programming.

“At NBCUniversal, we will always continue to make efforts to produce rewarding results.”