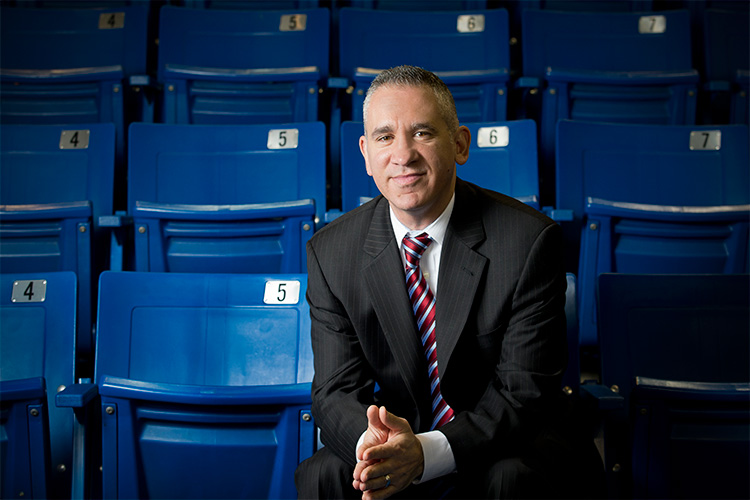 Larry Meli can add another title to his lengthy and distinguished career in basketball.

An alumnus of Temple University’s School of Tourism and Hospitality Management, Meli recently was promoted to President of the Delaware 87ers, the NBA Development League affiliate of the Philadelphia 76ers.

Meli, who has nearly 20 years of NBA front office experience, had been the 87ers’ Chief Operating Officer since December 2013, responsible for team operations, marketing, and public relations. Meli helped the 87ers’ secure their first TV broadcast partner and “created programs that forge ties with the local community,” said 76ers’ CEO Scott O’Neil, who in a team statement called Meli “an integral leader in driving this organization forward.”

“A great aspect of the NBA D-League is witnessing players who are on the cusp of realizing a dream and getting called up to the NBA,” Meli said. “In my role as President, I’ll get to train and develop our front-office team, so that they’re put in a position to be called up to the 76ers, as well.

“When I got into this business, I just wanted an opportunity. It’s a dream come true to work for an organization that you grew up rooting for, and to have the opportunity to showcase what you can do on a daily basis.”

Meli, who in 1994 attained his Master of Education degree in Sport and Recreation Administration from STHM, epitomizes the 76ers’ method of promoting from within. Hired in 1998 from the NFL’s Philadelphia Eagles, for whom he had served in a customer-service capacity, Meli joined the Sixers as the Director of Ticket Operations. Then he became the team’s Vice President of Customer Service, responsible for season ticket-sale retention. A new ownership group purchased the team in 2012, and later bought and relocated an NBA D-League team to Newark, Del. O’Neil met with Meli about becoming the 87ers’ COO.

“Having worked in the NBA for so long, it’s not at all what I expected, but I’ve loved every second of it,” he said. “It goes beyond basketball. … It’s all about the fan experience and being great community ambassadors. Every day, we strive to come up with memorable and unique experiences for our fans.”