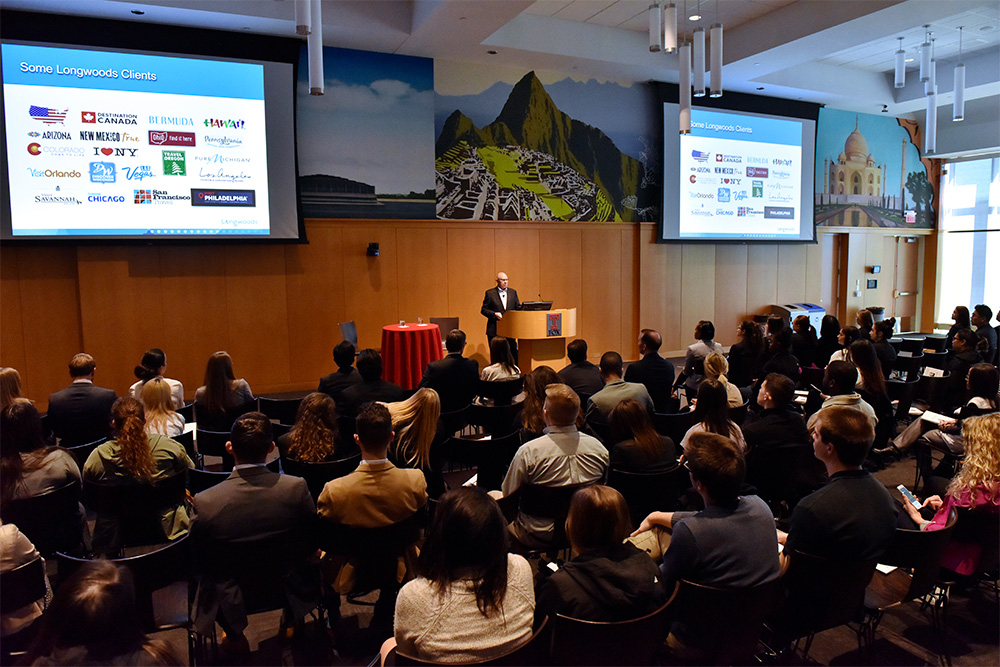 Dr. Bill Siegel, CEO and founder of Longwoods International, leads a discussion on destination marketing during his visit as STHM Executive in Residence. (Photos by Jim Roese Photography)

A destination marketing strategy comprises more than flashy photography on a billboard, or words in a full-page magazine advertisement. It delves into unlocking consumers’ emotions, and cravings for excitement and escape.

“That’s what we do best,” said Bill Siegel, during his March 29 visit to Temple University.

Siegel, the CEO of Longwoods International, spoke with students from Temple’s School of Sport, Tourism and Hospitality Management (STHM), serving as the school’s most-recent Executive in Residence. The ongoing speaker series invites accomplished business executives to Temple to meet with students and impart upon them their industry expertise in the fields of sport, recreation, tourism, and hospitality management.

Longwoods, a market research firm founded by Siegel in 1978, specializes in advertising research, from strategy development to measuring the bottom-line impacts or return on investment of campaigns. Longwoods conducts studies on destination image and visitor profiles, to improve the reach and exposure of its clients.

Siegel’s professional experience is rooted in higher education, having earned a PhD in psychology from the University of Michigan. His earliest research centered on experimental design and statistics, which provided him a foundation upon which to transition into market research.

Today, Siegel and Longwoods use methodologies the company created to dig beneath the surface levels of clients’ marketing strategies in a bid to “avoid promoting the wrong things and, instead, find those real hot buttons to push,” he said. 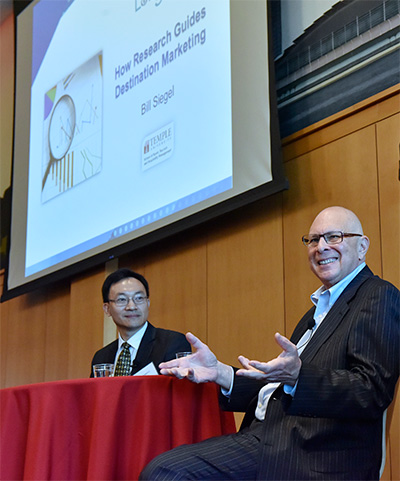 “In order for a campaign to work, we tell clients that they have to get beyond talking about features and amenities, things like restaurants or beaches,” Siegel said. “As a former psychologist, I hone in on the emotional side. Look at one of the most-successful destinations in tourism—Walt Disney World. (Disney) took a swamp in Florida, and sold fantasy and excitement. That’s what people were looking for, and that’s how he attracted them.”

Siegel, with Longwoods, has provided direction for Canada’s “The World Next Door” campaign, as well as Hawaii’s “The Islands of Aloha” and, most recently, Michigan’s “Pure Michigan” effort. The latter, said Siegel, has helped Michigan more than sextuple its tourism budget—reaching $34 million. It has helped the Great Lakes State generate a strong return on investment.

“That campaign is pure poetry,” Siegel said. “With (actor) Tim Allen on the voiceovers, the music from the film “The Cider House Rules” playing in the background, everything comes together. Pure Michigan has evolved from a regional campaign with a very small budget into an international campaign with a halo effect that has had spillover into multiple areas of the state’s economic development.”

A partnership between Siegel’s Longwoods International and Li’s U.S.-Asia Center for Tourism & Hospitality Research will soon be finalized, Siegel said. The agreement would grant STHM students and faculty access to Longwoods’ database for academic use, while Li’s research center — which is housed at STHM — could potentially support Longwoods’ efforts to reach the Asian tourism market.

“We are truly excited about this partnership with Longwoods and the prospect to work with one of the most-preeminent travel consulting brands in North America,” Li said. “From an academic research perspective, we are particularly grateful for being granted access to a huge travel dataset—a gift of enormous value to colleagues and students here at STHM.”

Siegel also commented on STHM’s Master of Science in Travel & Tourism, a graduate program with an online-delivery model that will launch in Fall 2017. The aim of the program is to prepare students to face the tourism industry’s challenges through analytical- and critical-thinking perspectives.

“The program takes advantage of existing online capabilities in a unique way,” Siegel said. “The concept of the program fills a gap that will help educate future leaders in tourism, which will be most beneficial.”