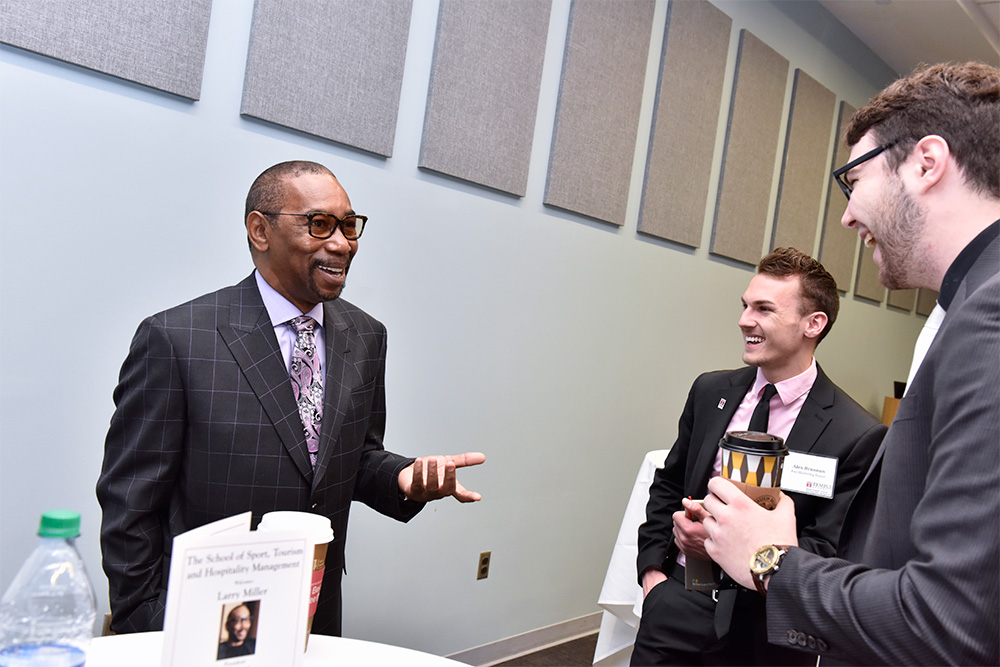 Larry Miller, President of Nike’s Jordan Brand, networks with students before his presentation as STHM’s Executive in Residence

On occasion, Larry Miller’s office phone rings — and on the other line is Michael Jordan. You know… His Airness. MJ. The G.O.A.T. (or Greatest of All Time).

“Actually, calls from him are pretty standard in my line of work,” Miller said.

Miller serves as President of Jordan Brand. He’s responsible for elevating the brand and driving all aspects of its global growth strategy. As recently as 2015, according to Forbes, Jordan Brand accounted for 58 percent of all basketball shoes sold in the U.S.

“That’s why there is no time to rest on our laurels,” said Miller, who visited Temple University as the School of Sport, Tourism and Hospitality Management’s Executive in Residence.

The STHM Executive in Residence program is an ongoing speaker series that welcomes accomplished business executives to impart their industry expertise to STHM students in the fields of sport, recreation, tourism, and hospitality management. 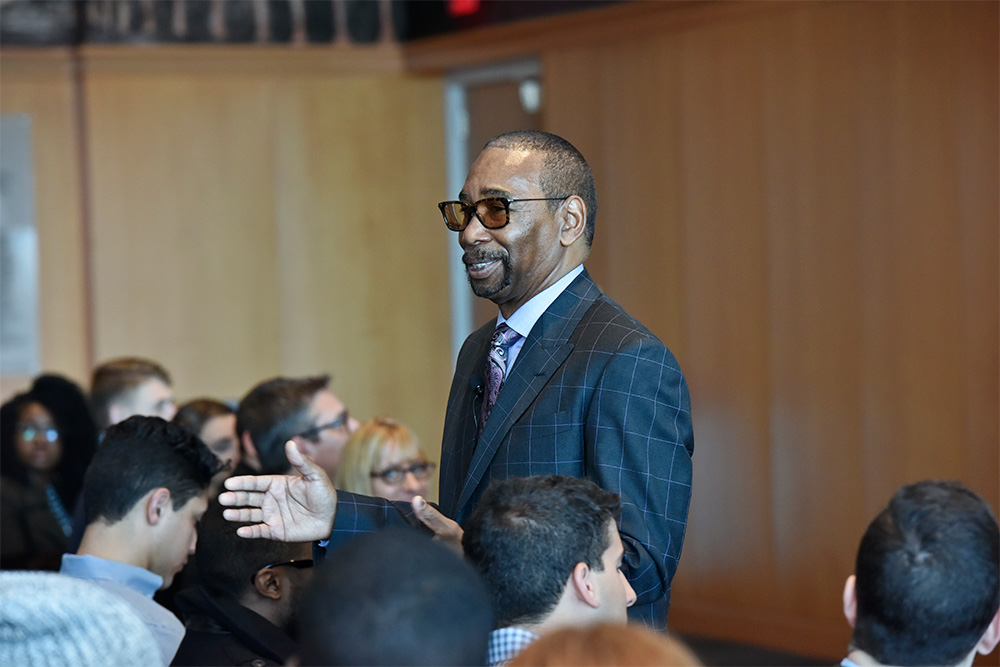 Larry Miller, President of Nike’s Jordan Brand, delivers a point during his presentation as STHM’s Executive in Residence

“These opportunities supplement what we do in the classroom and help to bring industry here to campus, and to our students,” said Dr. Aubrey Kent, STHM Associate Dean.

Miller is no stranger to the campus, having graduated from the Fox School of Business in 1982 with a Bachelor of Business Administration degree in Accounting.

“Temple absolutely prepared me for a career in business,” said Miller, a native of Philadelphia. “The university allowed me to start in accounting and transition into general management, marketing and beyond. It prepared me to look at what I do from a business perspective, because it’s easy to get caught up in the excitement of sports. You don’t have to be a professional athlete to have a career in sports. There are incredible opportunities out there.” 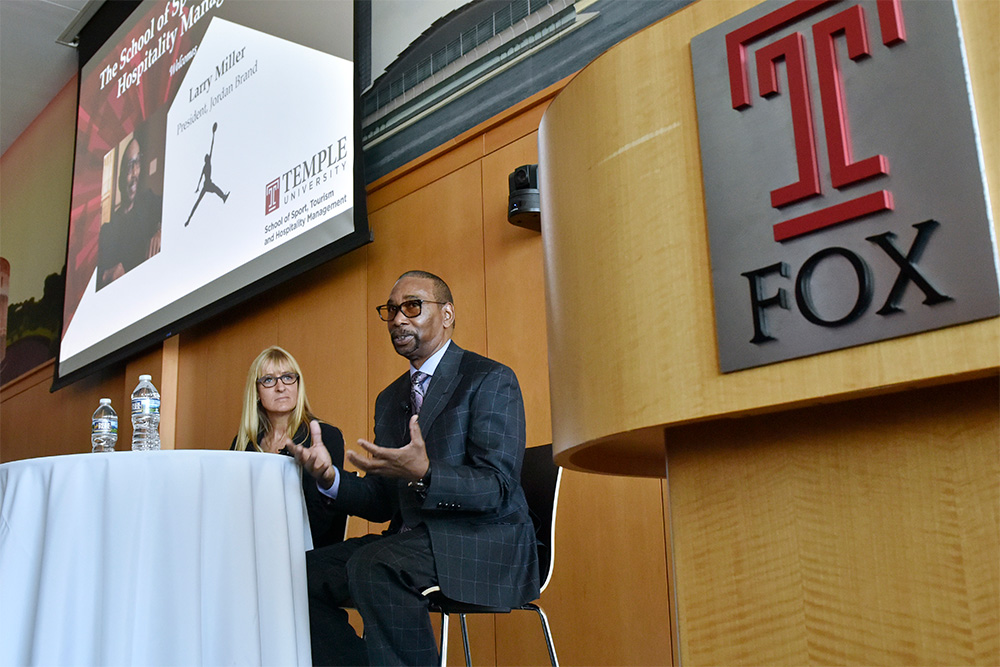 Larry Miller, President of Nike’s Jordan Brand, answers a question from Lara Price, Senior Vice President of Business Operations with the Philadelphia 76ers, during the question-and-answer segment of Miller’s visit as STHM Executive in Residence

Miller has served in his role since 2012, and from 1999-2006. Complex Magazine once named him one of the nation’s most-powerful people in the sneaker industry. In the five years between his stints with Jordan Brand, Miller served as team president of the NBA’s Portland Trail Blazers. He broke into the sport apparel industry in the 1990s with swimwear brand Jantzen, after stints with Campbell Soup Company and Kraft Foods.

Today, Miller works with Nike in its corporate headquarters in Beaverton, Ore., to continue the evolution of Jordan Brand, from an American commodity into a household name internationally. He said Jordan Brand already has launched branded stores in Hong Kong, Toronto, Beijing, Dubai and Paris, with plans for similar stores in other countries down the road. Additionally, he said, the popular brand is pouring resources toward its female clientele. “There are a ton of women who love our brand,” Miller said, “and we have to show them love in return by customizing the brand for them.”

Additionally, Miller said, Jordan Brand has utilized different media to reach its target audience. “We spend just as much, if not more, on digital ads than we do on television ads,” he said. “We want to be where consumers can see us.

“We want to instill in others that they can be the best, and inspire them to be their best. That’s our goal as a brand – to represent what Michael Jordan exemplified.”

“You could say that,” Miller said, laughing.