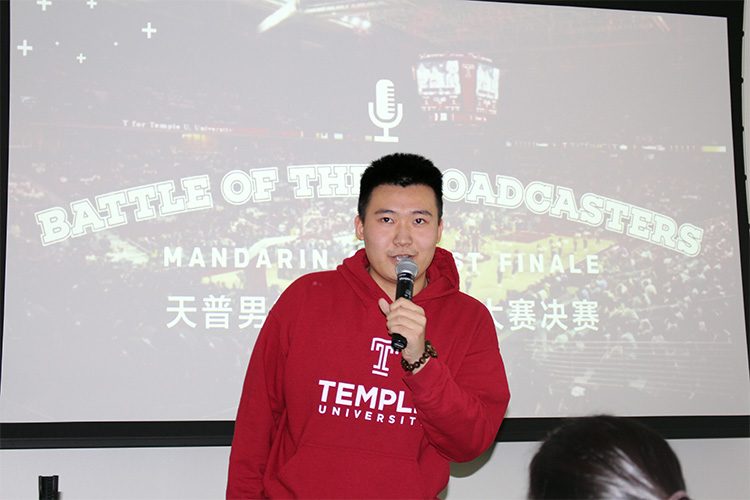 STHM student Shizhe You competes at the Battle of the Broadcasters, which pitted Temple students vying to become the Mandarin-language broadcaster for Temple men’s basketball.

School of Tourism and Hospitality Management (STHM) exchange student Shizhe You finished runner-up in the inaugural “Battle of the Broadcasters,” held Jan. 31 at Morgan Hall.

Organized by Temple University’s Office of International Affairs, the competition pitted five Chinese international students to determine the most-engaging and accurate live commentary of the Owls’ game against South Florida. James Yuan, a freshman from the Fox School of Business, and Javi Yuan, a recent graduate of the School of Media and Communication, shared first place, and will broadcast the team’s remaining home games on YouKu, the Chinese version of YouTube, and Temple’s Owlsports.com.

You joined STHM in Fall 2015 from Beijing, China. He is presently pursuing coursework at STHM to complement his education at the Central University of Finance and Economics, in Beijing, where he studied Sports Economics and Management.

From a young age, You showed promise on the soccer field and it wasn’t until a growth spurt shot him to nearly six feet tall that he had considered basketball. Finding success, You considered a professional career until an injury sidelined him. While in a wheelchair for three months, You turned his attention to sports marketing and economics, specifically how to gain recognition for sports management in China.

When he received an email about the Mandarin broadcasting competition, You jumped at the opportunity despite having zero experience in live-broadcasting of sporting events.

“It was great experience,” You said. “It was a way to share basketball with China.”

“I was truly impressed by all the contestants, particularly the winners, for their excellent presentation skills, great energy, and good sense of humor,” Li said. “This event … shows Temple’s unwavering commitment to internationalization and a vibrant campus life.”

You placed third overall, ahead of Metsky Liu, TUSP ’17, and Echo Chen, COE ’16, who placed fourth and fifth, respectively. The runners-up received free tickets to one of Temple’s upcoming home games, while winners Yuan and Javi Yuan, SMC ’15, in addition to their press passes to report on the remaining home games, received signed basketballs from Temple men’s basketball coach Fran Dunphy.

“Temple wants to integrate international students into our community,” Walker said. “What better way to do this then to engage Chinese students in American sports while respecting their own culture, the Mandarin language, and their love of basketball.”