Philadelphia Union soccer player Michael Lahoud and a professor at Temple University’s School of Tourism and Hospitality Management (STHM) have partnered to help prevent the spread of the Ebola virus.

Specifically, Lahoud and Dr. Thilo Kunkel, an Assistant Professor at STHM, hope to “Kick Ebola in the Butt.”

“I’ve teamed up with Thilo to start the Kick Ebola In The Butt Challenge. The Ebola virus started in Guinea and has spread to my home country of Sierra Leone,” Lahoud said. “It is one of the world’s most-life-threatening diseases. … To treat patients and prevent the disease from spreading across the world, donations are needed.”

The latest outbreak of the Ebola virus originated in Guinea in 2013, but was not detected for another four months. Since then, it has spread to at least five West African nations and claimed the lives of more than 2,100 people. In August, the outbreak was designated “a public health emergency of international concern” by the World Health Organization.

A native of Sierra Leone, a nation to which Ebola has spread, Lahoud and Kunkel hope to use soccer – the world’s most-popular sport – as their vehicle to fight the spread of the Ebola virus.

“I am delighted by the partnership forged between Dr. Kunkel and Michael Lahoud, not only in their identification of the Ebola epidemic as a worthwhile cause, but also in their proactive mission to increase global awareness while driving charitable donations,” said STHM Associate Dean Dr. Elizabeth Barber.

Here’s the concept behind Kick Ebola in the Butt Challenge, which shares traits of similar video-themed charitable drives like the ALS Ice Bucket Challenge.

For Kick Ebola in the Butt, one participant elects to have a soft, lightly inflated soccer ball kicked from five yards away into his or her backside. If the ball hits its intended target, the participant will donate to a charity that supports the fight against Ebola. If it misses, the kicker will donate to the cause. 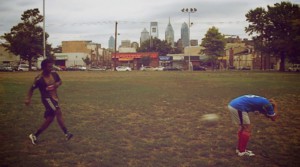 And like the ALS challenge, the participant can nominate a few individuals who have up to three days to Kick Ebola in the Butt – including the kicker. (Hey, turnabout is fair play.)

“One dollar or one-hundred dollars, it’s up to the participant to determine how much they wish to donate,” Kunkel said. “Every dollar and every donation matters in the fight against the Ebola virus.”

Causes supported by Lahoud, Kunkel and Kick Ebola in the Butt include: American Red Cross; Doctors Without Borders, which provides care for those afflicted with Ebola and training for those who treat it; and Schools for Salone, which strives to break the cycle of poverty in Sierra Leone by fostering elementary education.

“I always teach my students that we can use sport as a vehicle to make the world a better place, and not just to entertain the masses,” Kunkel said. “So linking up with Michael for this project gives me the opportunity to put theory into practice and, hopefully, help make an impact in the fight against Ebola.”

Participants are encouraged to use the hashtag, #KickEbolaInTheButt, to share their videos – and its charitable message.