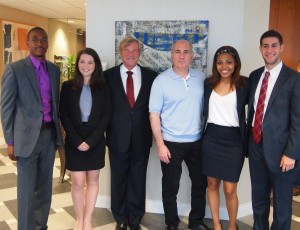 At every turn of his career, Leigh Steinberg has asked for a business card. It’s how he started a Rolodex, in the days that predated smart phones and digital contact lists. It’s also how Steinberg turned face-to-face connections into potential business opportunities.

One of the nation’s best-known sports agents, Steinberg has represented more No. 1 NFL draft picks and NFL Hall of Famers than anyone else in his trade. That didn’t happen overnight, either, he said. He’d often turn to the blank sides of those business cards he had collected and jot down personal notes about someone with whom he had interacted.

“All it takes is one player,” Steinberg said. “One successful player gives you a practice.”

Steinberg recently brought his travelling Sports Agent Academy to Philadelphia, sharing tales and tips on a career than has spanned 41 years. He addressed a room of college students and established professionals Aug. 1 on the 56th floor of One Liberty Place, in the Law Offices of Remick & Cabott.

“When Leigh and I first formed our partnership, we knew could accomplish special things together,” DeNicola said. “Meeting these four students and seeing their excitement and passion reminded me of myself when I was a student at Temple. I love Philadelphia and I love TU. It brings me great joy to give back to my roots.”

Earlier this year, Swiren said he began giving serious consideration to a career as an agent.

“I knew I had to jump at this opportunity,” Swiren said. “I know the knowledge that Leigh Steinberg and (COO of Steinberg Sports & Entertainment) Chris Cabott passed along to me, combined with all of the concepts taught by my STHM professors, will have prepared me for any endeavor in my life.”

The STHM students shared a few minutes with DeNicola, expressing their thanks for his sponsorship to participate in Steinberg’s event. Kemnitzer called it “an incredible experience to learn more about the professional sports industry, and connect with accomplished alumni.”

“One day, I plan on being a director of player personnel, if not an athletics director,” added Johnson, “and after sitting in the academy and getting advice from the greatest agent, it made me more excited to start my career.”

From getting started and getting licensed, to building a base of clients, Steinberg covered the sports-agent industry from top to bottom during his Sports Agent Academy, which has visited Newport Beach, Calif., and Houston, and has plans for similar one-day academies in New York, Miami, and Chicago.

Steinberg offered advice on recruiting clients. Having represented players since 1975, he instructed attendees to allow integrity to dictate their professional philosophies and brands. Steinberg, who’s often credited as the inspiration for the sports-agent movie, Jerry Maguire, said he’s built his name as a top-tier agent by doing just that, working with clients who have good hearts, good families, and a good sense of community.

“You have to master the skill of putting yourself in another’s heart and head, because you’ll be able to solve a lot of life’s problems that way,” he said. “It’s about being able to listen, to peel back the layers, and better understand who these people are. That’s recruiting, not only of the players, but of the teams you want to have fall in love with your players.”

“That comment stuck with me,” said Smith, one of the STHM students in attendance. “The industry is all about networking and making connections with others, but that advice is applicable to life, in general. The sports industry is one of the most competitive, and the sports academy will help a great deal in my professional development due to everything I learned from a legendary sports agent like Mr. Steinberg.”

Steinberg said he first came to value relationships after receiving advice from his father at an early age. He learned that a key to good business practice, he said, was in relating to people on a personal level, and by opting never to sacrifice professional reputation for short-term gain.

The breadth of opportunities in the sport industry, Steinberg told the attendees, includes careers in television, radio, multimedia, marketing, public relations, and more.

“And that’s why I want to be reading about all of you in the papers in the next five years!” Steinberg said with a wide smile.