For STHM alumnus, reporting for new golf network is simply par for the course

Lou Holder works for a golf network. That doesn’t mean that he gets mistaken often for an expert golfer.

“What’s my handicap on a golf course? Too high, but it is getting lower,” Holder said between chuckles.

Holder is an anchor on the newly formed Back9Network, an all-day, every-day golfing lifestyle network. He’s a co-host on “The Turn,” the network’s flagship show that airs multiple times daily, covering golf, fashion, gossip, entertainment, pop culture and all things in between.

A native of Cherry Hill, N.J., Holder is a graduate of the School of Tourism and Hospitality Management. He completed his undergraduate studies in communications at Rutgers University before getting a foothold in television. He arrived at Temple University in 1997, completing the Master’s of Science in Sport Administration at STHM in two years.

The pull of a career in television was too strong to ignore, so Holder pursued sports broadcasting. He’s worked for Comcast SportsNet Mid-Atlantic, the Fox affiliate in Washington, D.C., and the NBC affiliates in Hartford, Conn., and Atlantic City, N.J.

“I went to STHM thinking I’d be a public relations rep for a pro sports team, then I took some elective credits in the broadcast journalism school working with Temple Update and I never left,” Holder said. “The networking opportunities and the people at Temple are tremendous. Some of the best people I ever met were during my Temple days.”

Thanks to the work of his agent, and Holder’s connections in the communications industry, Holder caught word of the Back9Network’s formation earlier this year. He interviewed for a position and “I guess I fit the mold, because they basically hired me on the spot.”

The Back9Network, currently available only on DirecTV, is developing programming around shows like “The Turn.” One, called “Ball Hogs,” details stories of individuals who dive into water hazards to retrieve, clean and sell used golf balls. On “Golf Treasures,” two collectors travel the country in search of lost, forgotten or vintage memorabilia. Three cohosts on “The Clubhouse” best replicate the banter a golfer might hear on and off the course, and the intersection of golf and entertainment is on display in “Off Par.”

“The programming is great, considering we only got on the air a couple months ago,” Holder said of the Hartford-based network. “We’re growing.”

Back9 debuted Sept. 29. A month later, to the day, it was making national headlines. Bloggers, sports talkers and political pundits couldn’t get enough of Ahmad Rashad’s interview with Michael Jordan. During a sit-down with the basketball legend, Rashad asked Jordan to fill out his foursome, and name his dream team on a golf course. Jordan first said President Obama, then called Obama “a hack” on the golf course.

“That was huge. We went national,” Holder said. “And that’s the golfing lifestyle – people talking trash. It just so happened that one of the most-recognizable faces on the planet called out the leader of the free world on our network.” 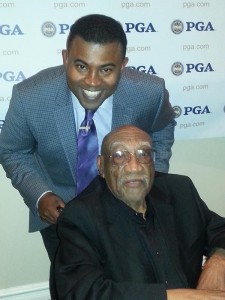 STHM alumnus Lou Holder, an anchor for Back9Network, a golf-centered television network, meets Charlie Sifford, who in 1948 turned pro to help desegregate the sport. Sifford recently received the Presidential Medal of Freedom, an award ceremony which Holder and Back9 covered.

The network also prides itself in covering the important events in golf like the recent historic awarding the Presidential Medal of Freedom to golf pioneer Charlie Sifford, whose turn pro in 1948 helped desegregate the sport. Holder is striving to develop stories for “The Turn,” a show that will transition from wine-and-cigar chat to what the professional golfers are wearing on the course, or what equipment might improve a player’s game. Nothing is off limits, said Holder, whose show has even highlighted the off-the-course relationships of players.

“We get into the gossip and the human-interest stuff: Bubba Watson working with a one-armed, 3-year-old kid golfer. Phil Mickelson going to Arizona State to coach with his brother. Tiger (Woods) dating (Olympic skier) Lindsey Vonn. Everything. We cover it all,” Holder said.

Holder isn’t sure in which direction the Back9 will next go, but he’s thankful his professional route took him through STHM and Temple.

“That was such a great experience for me,” Holder said. “I couldn’t be more thankful for everyone I met while I was there, especially (STHM Associate Vice Dean) Jeffrey Montague, (STHM Associate Dean) Dr. Elizabeth Barber, (STHM Professor) Dr. Michael Jackson, (Senior Vice Provost for Strategic Communications) Betsy Leebron Tutelman and the late (School of Media and Communication Professor) Rick Beardsley.

“And the whole campus looks so much different from when I was there, too. It’s amazing. It’s an oasis.”