As seats in M 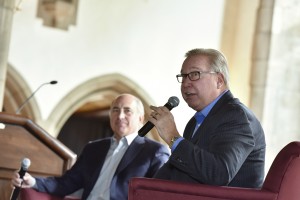 itten Hall’s Great Court filled with students from the School of Tourism and Hospitality Management (STHM), Ron Jaworski shared a memory from a day when he was their age.

“I was a 21-year-old when I was drafted by the Los Angeles Rams,” said Jaworski, the former NFL quarterback, “and I remember being in a meeting when someone told me that the average NFL career lasts three-and-a-half years. That’s it. Your playing days would be over before you turned 25.

“The students here in the room today have the right idea. You’re getting an education, and that’s to be commended.”

A football analyst for ESPN, Jaworski’s professional experience extends beyond his multimedia commitments. He owns a business development company, Business Clubs of America, as well as five signature golf courses in New Jersey. Since 2004, he’s also served as majority co-owner of the Philadelphia Soul, of the Arena Football League.

During his hour-long chat with students – which was moderated by co-owner of the Philadelphia Soul Cosmo DeNicola, FOX ’76 – Jaworski shared his four keys to success for today’s college students. Education, Relationships, Hard Work, and Leadership skills are paramount, he said.

A native of Lackawanna, N.Y., Jaworski starred in three sports in high school and was drafted by Major League Baseball’s St. Louis Cardinals at the age of 17. Rather than sign a professional contract, he attended Youngstown State University.

“No one in my family had gone to college, but my dad was smarter than me,” Jaworski said. “He knew I was a kid from a steel town and he said, ‘You’re getting an education.’ I’ve since been told, ‘Your next play could be your last play,’ and that sports aren’t always around for you. But if it wasn’t for my dad guiding me and directing me, I never would have been able to accomplish all that I have.” 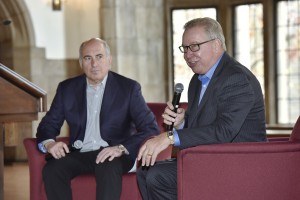 Jaworski went on to earn his college degree and play 17 seasons in the NFL, including 10 for the Philadelphia Eagles. Receiving an education and playing professional football allowed Jaworski to fine-tune his relationship- and leadership-building skills.

Even with an education, Jaworski said he has made professional mistakes.

“I’ll be totally honest with you. I was clueless,” he said. “I was trying to figure out how to beat the Dallas Cowboys’ defense, not run a business. I’m so thankful that I made connections and had professional mentors. I made mistakes, but I limited them. I learned how to get back up off the ground. It’s the same in sports as it is in business. There’s nothing wrong with failing if you’ve built those foundation blocks to support you when you fall down.”

“Life isn’t about who you know or who knows you,” said DeNicola, a Philadelphia businessman and entrepreneur. “It’s who you owe and who owes you. You have to work hard in life, and build connections before you ask for favors.”

Jaworski, as he concluded his remarks, encouraged students to capitalize on the opportunities available to them during their careers at Temple, and to remember, “there’s no substitute for working hard.”

“I may not have been the biggest, fastest, strongest, or smartest, but I knew no one was going to outwork me. When my opponent went to sleep at 11, I was up until 12,” Jaworski said. “The future is yours and it’s so bright. You are in the right spot. Temple University affords you great opportunities. My daughter went here. I should know. So take advantage of all that’s here for you.”