Disney Executive welcomed by School of Tourism and Hospitality

Mark Shafer loves numbers. He said his passion for data and analytics runs deep, and “as crazy as it sounds, I looked forward to my classes and tests” as a Temple University undergraduate. 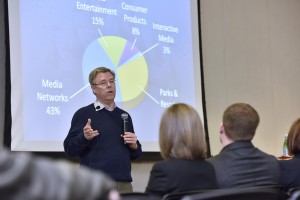 “To work at Walt Disney World Resort, you have to be a great storyteller,” said Shafer, the Senior Vice President of Revenue and Profit Management for Walt Disney Parks and Resorts. “We explain complex ideas in easy-to-digest ways.”

The School of Tourism and Hospitality Management (STHM) welcomed Shafer for its ongoing Executive in Residence series. During his Feb. 16 campus visit, Shafer spoke to students about his position and The Walt Disney Company, which reported $48 billion in annual revenues in 2014.

“When I first started at Disney, very few people were talking about analytics,” said Shafer, an alumnus of the Fox School of Business. “The initial conversations were about hotel revenue management. Given the successes we had analyzing data for our resort hotels, we were able to expand its use outside parks and resorts.”

And Disney did not. In fact, Shafer’s team projected record-breaking viewership for the game, which drew more than 33 million viewers.

In discussing the complexity of his position, Shafer mentioned his eldest son, Zack, an economics major at Florida State University.

“The discipline of revenue management, it’s a thought process,” he said, “and I tell my son that, in this line of work, you need to be able to convey your thoughts clearly and have your message understood. I encouraged him to consider minoring in journalism for that reason.”

The magic of Disney has transcended from his working environment to his personal life. Shafer and his wife Jane refer to their 7-year-old daughter Caelin as the “princess” of the house.”