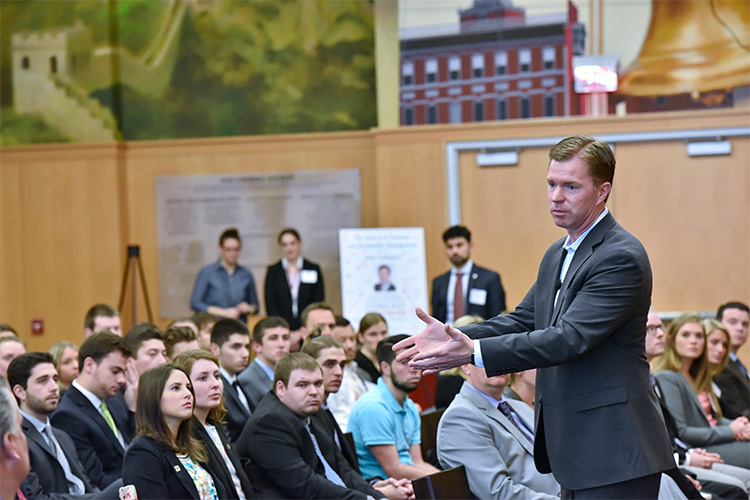 Comcast Spectacor’s Senior Vice President of Strategic Growth Initiatives, Gallagher presented a video snippet from a TED talk. The video showed a concertgoer dancing by himself. In time, another man joined in. Soon after, more and more people flocked to those original two dancers.

“You need to have the courage to be the leader, or be that first follower,” Gallagher said. “Both roles show that, personally and professionally, you don’t always have to be right, but that you have the creativity, the charisma, and the courage to succeed.”

Gallagher visited Temple University March 29 as part of the School of Tourism and Hospitality Management’s ongoing Executive in Residence series, which unites students and faculty with industry leaders from the fields of sport, recreation, tourism, and hospitality management. 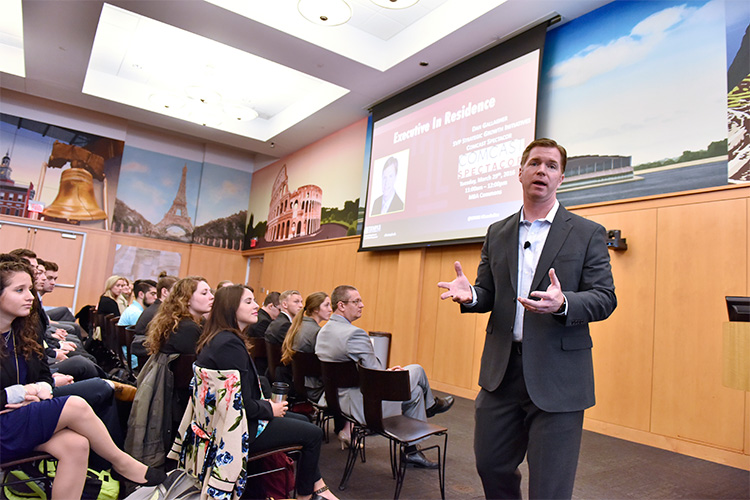 In his role with Comcast Spectacor, Gallagher leads corporate communications, information technology, training functions, and management changes to fuel the growth of the company and its various entities, including Philadelphia’s Wells Fargo Center, the NHL’s Philadelphia Flyers, and Spectra, which provides venue management, food services and hospitality, and ticketing and fan engagement to more than 300 clients at 400 global properties. Spectra provides venue management, and ticketing and fan engagement to Temple University’s Liacouras Center.

Though students in attendance might pursue different lines of work after attaining their degrees, Gallagher said, their futures eventually would overlap.

“We are all talking about jobs where the role is hosting others to create memories,” he said. “At Spectra, our focus is whether we are hosting a concert, a wedding, or a ballgame, we are transforming events into experiences through our passion for and attention to the details.”

Gallagher, a Philadelphia native, explained that Comcast Spectacor takes great care to avoid “cookie-cutter scenarios,” wherein properties in different regions of the country serve different food, for example. “A cheesesteak works in Philadelphia, but it may not work in Phoenix,” he said. 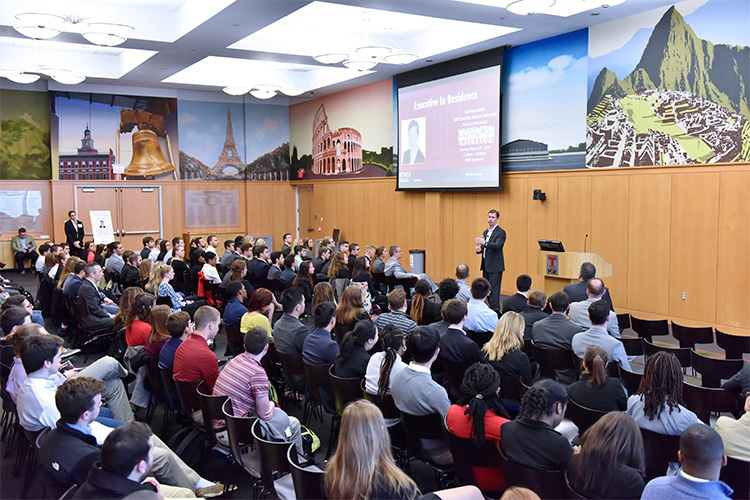 Comcast Spectacor’s strength, he said, is in the hiring of employees with expertise in various capacities. Case in point: Two years ago, Gallagher left a job within parent company Comcast, in which he’d directed leadership and organizational development for 13 years. When he joined Comcast Spectacor, which he’d previously helped in the rollout of enterprise systems, Gallagher was admittedly new to information technology, a prominent aspect of his job description.

“I went from a position where because of my tenure and functional training, I knew my job inside and out, to a position where I didn’t always know the answers,” Gallagher said, “but to be a leader, you have to surround yourself with capable individuals who complement your skills.”

You also have to study patterns, Gallagher said. Patterns were the basis of his undergraduate degree in sociology and, later, his master’s degree in training and organizational development – both from Saint Joseph’s University. Through patterns, companies like Comcast Spectacor can best determine where, when, and how to pool their resources and identify new opportunities for growth.

To better make his point, Gallagher used an analogy – not unlike the video of a dancing concertgoer.

“When you’re stuck in traffic, it’s easy to get caught staring at taillights,” Gallagher said. “But leaders rise above the traffic and find the patterns, so that the next time, they can avoid the traffic and get ahead of it.

“You’ll find that Temple and STHM are preparing you to do just that.”