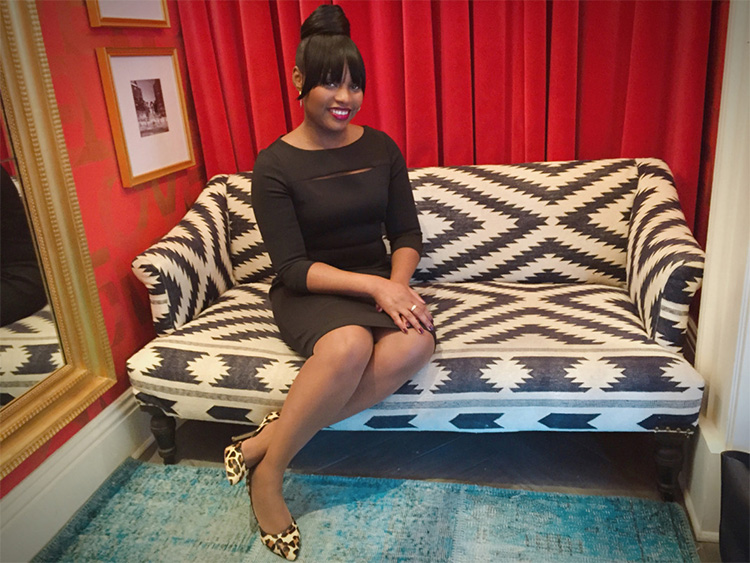 STHM alumna Carol Watson is the assistant general manager of the Hotel Monaco, in Philadelphia. She credits her professional success to strong customer service.

In the hospitality industry, guest service is everything. For Carol Watson, assistant general manager for the Hotel Monaco in Center City, earning the satisfaction of her customers is non-negotiable.

“We say, ‘If it can fit in the room, let’s do it,’” said Carol Watson, assistant general manager of The Hotel Monaco in Center City Philadelphia. “It’s all part of that extra touch.”

Watson has made her mark in hospitality with her attention to those extra touches. A graduate of Temple University’s School of Tourism and Hospitality Management (STHM), the 36-year-old Watson worked her way from the front desk to her current managerial position with Hotel Monaco.

Part of bringing the city to each guest, she said, is paying attention to each aspect of their stay. It’s Watson’s job to see that the necessary accommodations are made within the Hotel Monaco, a pet-friendly hotel. The hotel’s ballroom is often a staple for weddings and business conferences. Watson’s touch can be seen in ensuring a company’s logo is displayed, or that the bride’s and groom’s rooms are filled with love balloons.

“We like to check in as a second family,” Watson said, of the need to anticipate particular needs.

Upon graduation from STHM, she began work at Philadelphia’s Hyatt at the Bellevue, working closely with patrons who clamored for top-notch accommodations at the hotel, which is located on the city’s iconic Avenue of the Arts. Watson went from the Hyatt’s front desk to marketing and sales for the Hotel Palomar—the Kimpton Hotels cornerstone that would lead her to the Hotel Monaco.

Having carved a career through successful hotel management and marketing, Watson admits to having stumbled into the industry. A Pittsburgh native, Watson followed her brother to Philadelphia where he was attending medical student. She initially enrolled at Temple as a chemistry major. Peering down her projected career paths, Watson decided to detour from becoming a chemist, doctor, or nurse.

“I looked up and was left wondering, ‘What’s next?’” said Watson, from the lobby of the boutique hotel at which she works.

Satisfying Watson’s nascent interest in business administration – particularly in hospitality – STHM afforded her a seamless transition between majors. Working closely with STHM Assistant Dean Jeffrey Montague, Watson was intrigued by the scope of the industry. Far beyond hotels, she discovered that tourism and hospitality could be the basis of a country’s entire economy. Working through the curriculum, Watson interned in the fields of both destination management and event planning before finding her niche in hotels.

“This position at the Hotel Monaco brought me back to where I started – in operations,” Watson said. “Having the freedom to use the talents of a team and its collective ideas is very rewarding.”

Watson works collaboratively with the diverse department heads within the hotel to ensure that its myriad visitors consistently perceive the energy she first encountered in Philadelphia in 1997.

“Philadelphia became a destination outside of cheesesteaks and Rocky,” Watson said. “It’s exciting to see all that happened and still see the city retain its small neighborhoods.”

Watson, a wife to husband Carlos and mother to nine-year-old son Carlos, has her sights set on becoming a general manager in the future. Currently, she’s focused on enjoying her success and paying it forward. Not only does she encourage other employees to benefit from the hotel’s distinctive opportunities – it had a front-row seat to Pope Francis’ processional during the World Meeting of Families last September, for example – she urges her colleagues to develop themselves outside of work. She also reaches out to STHM with internship opportunities, giving students that upperhand she received while at Temple.

“Take risks,” Watson said, sharing her motto for transitioning from classroom to corner office. “Be open to new experiences, because you never know where they may lead you.”