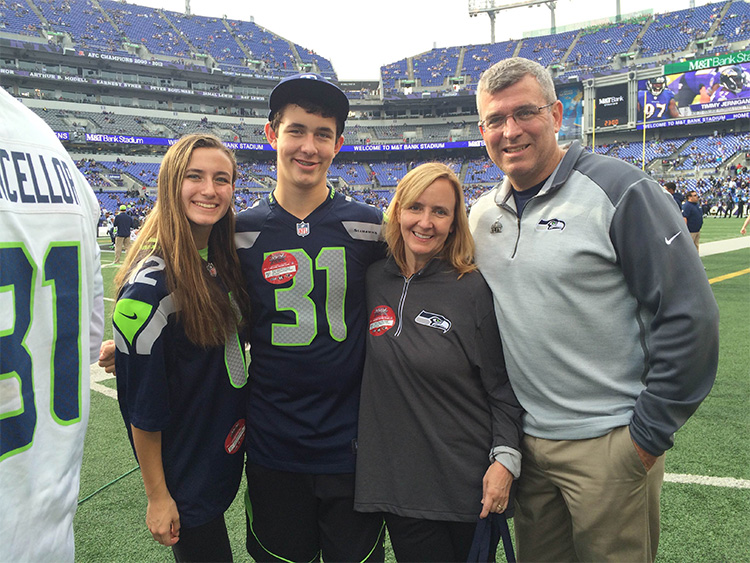 STHM alumnus Todd Brunner, far right, serves as a scout for the NFL’s Seattle Seahawks. Joining him on the sideline at a recent game were his daughter Annie, son Chad, and wife Nancy.

Todd Brunner has made a career out of watching football. As a college scout for the NFL’s Seattle Seahawks, Brunner’s eyes are forever searching the field for the next great player.

Brunner, who received his Master of Education degree in Sport and Recreation Administration from the School of Tourism and Hospitality Management (STHM), grew up around the game. His father, John, coached the sport at Princeton University before taking a job in the NFL, and his brother, Scott, played quarterback for the New York Giants. Brunner himself played, at Lawrence High School in the New Jersey township of the same name, and at Lehigh University.

When his playing days were over, Brunner set his sights on another career path. He attended a high school football coaching convention, where he met a Temple coach who opened his eyes to opportunities in athletics. This led Brunner to Temple, where he served as a graduate assistant with Temple’s football team while obtaining his graduate degree in 1992 from STHM.

Brunner credited Dr. Michael W. Jackson, STHM Professor of Sport and Recreation Management, for helping him forge the connections that would span his career in the NFL.

“Networking is key,” Brunner said. “You can never know who you’ll end up working for one day.”

It was through connections that he began interning with the Philadelphia Eagles in 1994. Embracing “grunt work,” Brunner said, he logged tapes shuffled from scout to scout, ripping the material off betacams. Proving himself both as a team player and a self-starter, Brunner turned his internship into a job offer. He stayed with the Eagles for three years before joining the San Francisco 49ers as a northeast regional college scout.

Brunner joined the Seahawks in 2012 and was with them when players he handpicked helped carry the team to a Super Bowl championship. Each year, even when the public eye isn’t trained on the Super Bowl just yet, Brunner hopes the guys he’s evaluated make it all the way.

“It’s the goal of every guy in the NFL to attend the Super Bowl. The first one I got to go to was in my home state of New Jersey and that was great,” said Brunner, referencing the Seahawks’ win over Denver in Super Bowl XLVIII in East Rutherford, N.J.

Being a scout is “basically giving my opinion,” Brunner added. “Stick with what your gut says about a player. Once you start doubting yourself, you’ve lost.” Finding the player that gives him that good gut feeling, however, takes time and a lot of travel. Most of his calendar is devoted to visiting colleges and evaluating prospective NFL players.

When he views tapes or watches a player live, Brunner wants to know that he dominates at his respective position. At times, he’s asked his wife, Nancy, and children to watch the tapes he receives, knowing that if they can pick out which player he’s looking for, he’s found the right guy. Brunner expects the players he scouts to deliver on and off the field. He screens candidates to ensure that no one has to worry about what’s going on after the games end.

“You just want to be sure the team has the right guys, and not somebody who could put a black mark on the franchise,” Brunner said.

Brunner, whose focus is on the Northeast and Mid-Atlantic regions, hopes to one day scout the entire country and possibly become the college director for an NFL team. He’s never seen himself pursuing a career in anything other than football, and has passed his passion for sports on to his children. His daughter, Annie, a high school junior, plays field hockey and basketball and his son, Chad, an eighth grader, plays baseball and basketball.

“Playing football and seeing the competiveness of it is amazing,” Brunner said. “I just always want to be around it.”