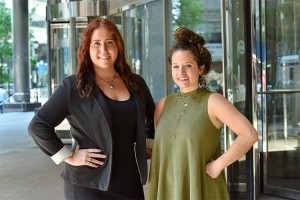 Clare Bachman and Leah Gelman have a scenic view of Philadelphia from their office at 1900 Market Street. The rest of the country will get an up-close look at the city in July, when Philadelphia hosts the Democratic National Convention.

Bachman and Gelman are working with the Philadelphia 2016 Host Committee, and in conjunction with the Democratic National Convention Committee (DNCC). The recent alumnae of Temple University’s School of Sport, Tourism, and Hospitality Management (STHM) served senior-year internships with Host Committee, and will maintain their positions until the completion of the convention, July 25-28 at Wells Fargo Center.

“When you think of a senior internship, you never think you’ll be working on the Democratic National Convention,” Gelman said. “It’s a once-in-a-lifetime opportunity.”

“This internship has been a way for me to give back to Philadelphia, which has given me so much,” said Bachman. 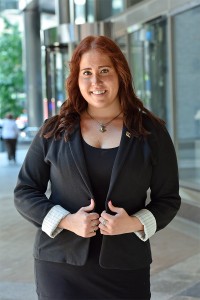 Bachman serves as an operations and logistics intern who represents both the DNCC and Host Committee. She oversees the processes through which the convention’s anticipated 10,000 volunteers have registered, and received training and assignments. Jeffrey Montague, STHM’s recently retired Associate Vice Dean, encouraged students within his Senior Professional Development Seminar course to register as DNCC volunteers, and Bachman jumped at the opportunity. She’s been involved with planning the convention in an intern’s capacity ever since.

“As you might expect, there are different things daily in my role,” said Bachman, a Millerstown, Pa., native, who will lead and manage volunteers on site during the course of the convention. “Even in our office, it’s a different dynamic, with both committees coexisting. It’s great to witness it first-hand.”

Bachman, who in May received her Bachelor of Science degree in Tourism and Hospitality Management, said her internship has put her in position to meet high-ranking officials. She has shared conversations with former Pennsylvania governor Ed Rendell and current Philadelphia mayor Jim Kenney, and has worked alongside Kevin Washo, the executive director of the Host Committee.

“Clare has been a key player in helping us build and cultivate our office operations,” said Hannah Tran, volunteer director for the Host Committee. “As the convention in Philadelphia is a once-in-a-lifetime opportunity, it has been great to have Clare during so many stages of our planning and now implementation. She liaises with the thousands of volunteers who have expressed interest in our civic efforts, and we are excited for her to be a part of this historic event.” 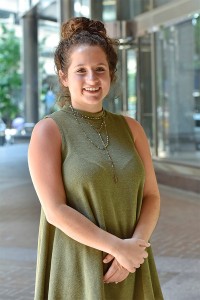 Gelman, a native of Pittsburgh, contributes to the planning of more than a half-dozen projects that will transpire within the city during the convention – ranging from a citywide happy hour and a food-truck festival to convention watch parties. Another is the development of a mobile app of a scavenger hunt for donkey-shaped statuettes.

“It’ll be called Donkeys Around Town,” said Gelman. “We’ll position them in 57 different locations. When someone uses the riddles and finds the donkey, they can check in using the app to receive points that can be redeemed for prizes. Overall, it’s been a terrific learning experience.”

During the Fall 2015 semester, Gelman spoke with a Host committee representative about internship opportunities. A majority of Gelman’s professional experience had come within the restaurant industry, and with her knowledge of the city and its public transportation system, interning for the DNCC and Host Committee “seemed like a perfect fit,” said Gelman, who will graduate in September with a Bachelor of Science degree in Tourism and Hospitality Management.

“Leah is very creative and self-motivated,” said Jennifer Nagle, vice president of business development with the Independence Visitor Center. “The environment in which we’re working is very fast-paced, and she keeps up with everything. It’s been a pleasure to work with her.”

While their positions will expire when the DNC leaves town, the STHM graduates have valued their internship experiences.

“This internship has been as rewarding as you might expect,” Gelman said.

Added Bachman: “This has been a tremendous gateway, between graduation and my first professional opportunity, and I couldn’t have asked for something better.”