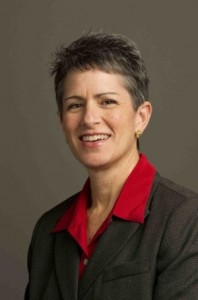 During a recent hotel stay – at a Wyndham property, of course – Patricia Lee caught herself people-watching. She had identified a comfortable vantage point and, from that spot, and for no more than half an hour, observed the hotel’s employees going about their business.

This was completely natural for Lee, who is in the business of understanding people.

Wyndham Worldwide’s Senior Vice President of Human Resources and Chief Diversity Officer, Lee discussed taking calculated risks and her pursuit of professional opportunities, among other themes, as part of the School of Tourism and Hospitality Management (STHM) Executive in Residence program.

A leader in employee engagement and organizational development, Lee shared stories of her more than 10 years in the hospitality industry, as an executive with Wyndham Worldwide, before engaging the nearly 150 students and faculty in attendance in a question-and-answer session. She also broached the topic of time management, which she described as a daily challenge in her line of work.

“The easiest way to describe my day-to-day is this bumper sticker I saw once. It said, ‘You make plans. God laughs,’” Lee said. “I have my to-do list and I probably don’t get to any of it.”

Lee explained that, in her position with Wyndham Worldwide, she is a self-described “sort of fire-fighter.” The New Jersey native, an expert in problem resolution, said she first honed her change-management and coaching skills at Lehigh University, where she began as an engineering major before completing her undergraduate studies in The Classics. The predictive nature of engineering, which uses measurements and metrics, helped form her ability to handle elements of human resources that aren’t nearly as predictable, Lee said.

Dr. Elizabeth Barber, Associate Dean of STHM, kicked off the Executive in Residence programming with a rhetorical decree in the same vein.

“What are your aspirations?” Barber asked, hinting to the unpredictability of the job market. “That first job may not be your last job. It may not be where you end up. It’s never too early to think in that manner.”

Lee thinks similarly. She said she often directs her team at Wyndham Worldwide to steer from their first attempt at a resolution, pointing out that those often are knee-jerk reactions. Instead, Lee said, the second and third options tend to be more fully developed.

“I love people. You have to love people to do what I do,” Lee said, “but my focus is putting metrics around things, measuring things, streamlining processes. For example: I might ask, ‘What are the key performance indexes, the returns on investment?’ Those are things looked at from a financial perspective.

“Can those same areas of measurement be put into the human behavior? I think they can. People will never be 100-percent predictable. It’s bringing scientific measures to the human side. Everybody is unique and you have to identify the drivers of individuals.”

Wyndham Worldwide is “more than just a hotel business,” Lee said, pointing to the time-share and property-exchange venues of Wyndham that are managed by some of the company’s 33,000 employees worldwide in 65 different countries.

And Lee is more than just another executive. She is an individual who has allowed her core values to dictate her career path. She informed the students in attendance that she never once has accepted a position she sought; instead, she said, she jumped at opportunities as they presented themselves.

She cautioned the undergraduate and graduate students in the room against mapping out every last step of their days. Like those daily to-do lists that Lee assembles, there’s risk in leaving items on those lists incomplete. Lee reflected upon an intern with whom she once crossed paths. The intern was driven and motivated, Lee said, but did not allow room for failure.

Like a plush chair in a hotel lobby in Philadelphia, for example.