Geoff Ballotti’s first position in hotels was working as a dishwasher. Then, he was promoted to busboy. Soon after, he’d found his way to waiting tables. 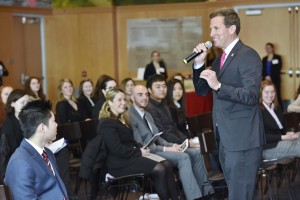 “Anyone who says you can’t climb the ladder in this field isn’t working hard enough,” said Ballotti, President and Chief Executive Officer of Wyndham Hotel Group.

Ballotti spoke to School of Tourism and Hospitality Management (STHM) students on a Feb. 24 visit to Temple University, as part of the school’s Executive in Residence series. With Wyndham Hotel Group, whose global portfolio consists of approximately 661,000 rooms in 7,650 hotels in 70 countries, he is responsible for guiding the strategic direction, operation, growth and performance of the business and its 6,000 associates.

The Boston native imparted tips on a career in hospitality, the pursuit of work abroad and his humble beginnings in the industry.

“We are so delighted to have Geoff join us,” STHM Associate Dean Dr. Elizabeth Barber said, in her welcome address. “Growth of the tourism and hospitality industries is not taking place just here in Philadelphia or in the United States. It’s expanding internationally, as well, and Geoff can speak to that. This is such an exciting time to be in this industry.”

Ballotti wasn’t always working his way up the ladder in hospitality. In fact, he majored in French at Colby College, in Waterville, Maine, and had hoped to teach the language, before taking a position in banking. As a banker, Ballotti said he had crossed paths with a marketing executive who represented the former ITT Sheraton, which has since been purchased and rebranded as Starwood Hotels.

“And I thought, ‘Wow. His job is much more fun than mine,’” Ballotti said. “I had these mundane stories about construction loans in Chelsea, (Mass.), or South Boston, or New Hampshire. … and he was talking about opening hotels on the Great Wall of China. I remember going to my first ITT Sheraton World Conference. Here was this hotel world, and it was so incredibly exciting.”

Ballotti never envisioned a career internationally. After completing his Master’s of Business Administration at Harvard, he took a position in development with ITT Sheraton, which had been assembling a team to close a deal in Italy. Ballotti, who had a basic understanding of the Italian language, joined that team and relocated with his wife, Leslie, to Milan.

“What was supposed to be a couple years overseas became 10,” he said.

Ballotti, nor his wife and their four daughters didn’t seem to mind. He became a general manager in the industry, moving from Milan to Brussels and, later, back to Italy before returning stateside.

“In this line of work, especially as a GM, you’re like a ballplayer in that you get moved around a lot,” Ballotti said to the group of students who had gathered at Alter Hall. “To think, I had gone from wanting to teach French, to banking, to real estate development and then into operations, I never imagined such an exciting career”

During his candid presentation, Ballotti urged STHM students to educate themselves on technologies that weren’t available when he was getting started professionally. He encouraged them to turn to social media to learn about a future employer in advance of an interview or a business meeting. “My favorite six words: Fail to prepare, prepare to fail,” he said. He vouched for hard work and dedication in the workplace “because there’s no hiding from bad scores and bad reputations on the Internet.”

He also reminded students that it’s never too late to get into his line of work.

“You work your way up, into leadership positions, and there’s something different and exciting every day,” Ballotti said. “As a general manager, that couldn’t be more true. I lead GMs, and that’s just as exciting as being a GM.

“You get bitten by the bug and you never leave. And the people I see leaving always find their way back.”