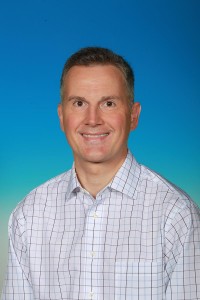 Rob Ellis has gone from one set of airwaves to another.

Ellis recently debuted as a co-host on The Comcast Network’s Breakfast on Broad, a sports-themed, weekday-morning talk show. Ellis, who earned his undergraduate degree in the Sport and Recreation Management program now housed at the School of Tourism and Hospitality Management, had been a longtime sportstalk-radio personality on 94 WIP.

“We don’t take phone calls like on sportstalk radio but we can be reached on Twitter, Facebook, Instagram, you name it,” said Ellis, BS ’95. “I always thought the Philadelphia market needed this kind of show. It’s a way to have fans’ opinions heard and, in this day and age, I think that’s crucial.”

“As a sports fan in this city, there are a lot of things that are unanswered for me and just being able to bring in guests like Terrell Owens, to figure out why something happened or to get an answer that’s been covered for a while, is the most gratifying,” said Ellis, a native of Upper Darby, Pa.

As an undergraduate student, Ellis envisioned becoming a general manager of a professional sports team or even pursuing a career as a college athletic director. He credits his curriculum in Sport and Recreation Management, which afforded him plenty of writing opportunities, for opening the door to internships in media and communication. During his senior year, Ellis held an internship at NBC10 in Philadelphia, and his love for sports media soon followed.

“I think when students are in college, they think, ‘If I major in this I can only get a job in this field,’ and that’s not necessarily the case,” said Ellis. “I really encourage students to accept internships and choose positions that may be a little bit out of their scope, because it’s a great way for them to figure out their path.”

Ellis worked at Sports Radio 94WIP in Philadelphia for eight years, during which time he also produced Daily News Live, a weekday sportstalk TV show that aired on Comcast SportsNet, and as an on-air sports anchor for CBS 3 in Philadelphia.

For current STHM students about to embark on careers in the sports field, Ellis advises them to cherish their writing backgrounds and prepare for long hours.

“If you are looking for a 9-to-5, job become a banker,” Ellis said. “Otherwise, do internships, be willing to move, and, most importantly, keep pursuing your dream because it will pay off eventually.”

Watch Ellis on Breakfast on Broad weekdays from 6 a.m. to 8 a.m on The Comcast Network.