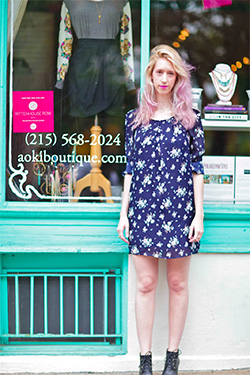 The eventual career goal, Alina Alter said, was to be self-employed. But to do so by the age of 24? Not even Alter could have predicted that outcome.

In 2012, two years after graduating from Temple University’s the School of Tourism and Hospitality Management (STHM), Alter opened Aoki Boutique. The Center City Philadelphia-based women’s shop offers the avant-garde in jewelry, household, and clothing items that arrive straight from the various designers. Alter, a solopreneur, established her business out of her passion for entrepreneurship.

“I want it to feel eclectic, but not random,” Alter said recently, on a visit to her shop. “You have to curate really carefully, so everything tells a cohesive story.”

Aoki Boutique stands out on 22nd Street near Rittenhouse Square, as the turquoise paint of the exterior contrasts with the black awning. Inside the shop, Alter was able to turn the small building with interior-exposed brick into a gateway to her own fashion sense. With items like pretzel-shaped earrings or an engraved silver spoon that reads “Cereal Killer,” Alter’s boutique is geared toward creative women.

Alter took a creative route to becoming self-employed. She spent her last semester at STHM in Fort Lauderdale, Fla., working for W Hotels. After graduating, she planned on working in Arizona with Teach For America, but said she changed her mind. While only indirectly involved with an entrepreneurship program at Temple, Alter said the education she received formed her into a well-rounded person.

Additionally, she’s from a family of business owners. Her paternal grandfather started a small business in Philadelphia that her father then took over. And her mother’s family owns and operates a bed and breakfast in Austria.

“Our professors at STHM always told us about cool, interesting things that people were doing in the industry,” Alter said. “That’s how I realized that even if I don’t work in the hospitality industry, I could still apply those principles with my business. 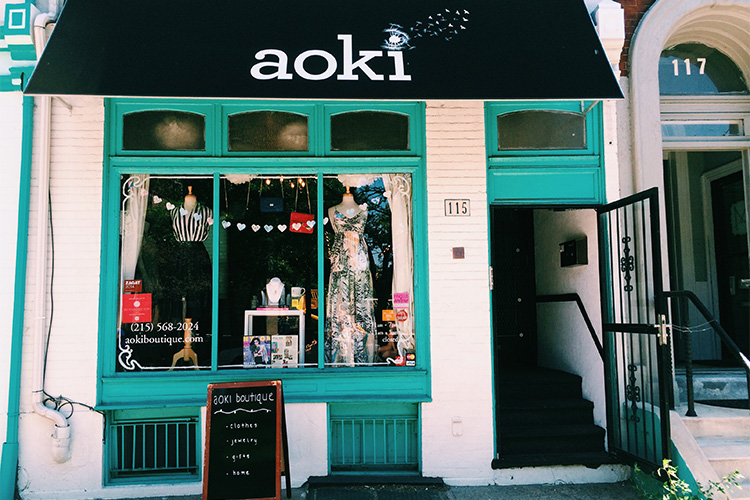 “I was comfortable with creating my own path,” she added. “I knew I never wanted a 9-to-5 job or to work in an office. I love to travel and I love working in non-traditional settings, so that is what drew me to the hospitality industry.”

As the store’s curator, Alter attends trade shows in New York, which helps with identifying new vendors. She said she recently attended the bi-annual Philadelphia Punk Rock Flea Market, where she found a local soap company with products she now sells. She said much of her inspiration comes from the subcultures she saw in Tokyo, while studying abroad, and from her feminist ideals.

“I buy with my own personal taste, so it is really authentic for me to sell to people,” she said. “I try to portray a message of empowerment for women with the products I choose and the way I operate my business.”

Alter’s boutique doubles as a host of musical performances, coloring parties, and live paintings by local female artists. She said she wants to “create a sense of community that exists outside of the main function of a business.” One of her returning customers, Adriana Zupa-Fernandez said that Alter’s business methods have led to her success. 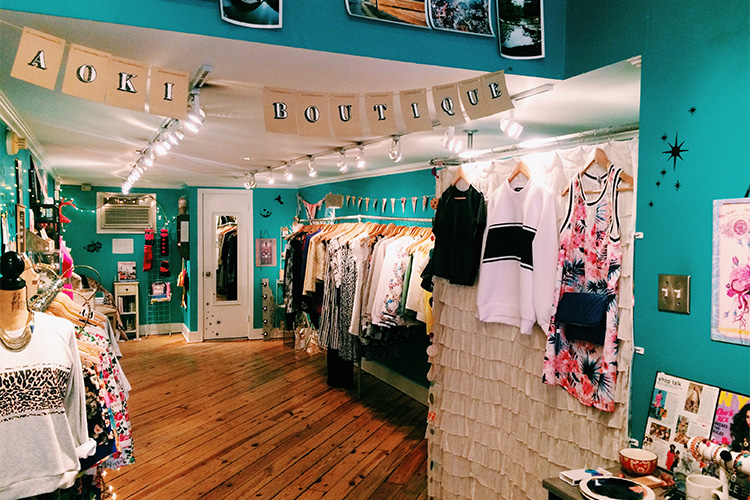 “Rather than treating her customer like a no-name with a dollar sign above their head, Alina respects and cares for her customer as an individual with a heart and soul,” Zupa-Fernandez said. “It sounds simple, but not easy to find in the retail space and as retail becomes more ingrained in the cyber world, the quality becomes even rarer.”

Alter hopes to continue creating a friendly atmosphere within her boutique. She added that she would like to closely combine her traditional hospitality roots and her interest in entrepreneurship by opening a bed and breakfast in the future.

“I think the ambiance created here, the feeling people get when they walk in the door is just as important to me as the sales that I make at the end of the day,” Alter said. “Creating memories for people is important to me, so I definitely try to apply that to the store.”