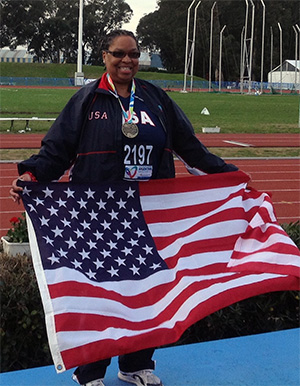 When Janet Dennis was growing up in North Philadelphia, she viewed Temple University as her playground. Now, as a Transplant Games athlete, Temple’s facilities are often her training ground.

Dennis received a heart transplant in Summer 2005. Less than a year later, she won her first medal at the Transplant Games of America, held in Louisville, Ky. The Transplant Games are a multi-event sports festival for individuals who have undergone transplant surgeries, according to their website.

“I have never been sick,” said Dennis, who wears a gold necklace that sports the date of her transplant, 7/6/2005. “The last time I was in the hospital was the day I was born.”

Dennis received a Bachelor of Science degree in Therapeutic Recreation in 1977, from what was then known as Temple’s College of Health, Physical Education, Dance, and Recreation.

At age 49, Dennis experienced difficulty in climbing the stairs at her local train station and in her home. She visited a hospital and learned of her heart problems, putting her out of work for 20 months and placing her on the list for a heart transplant. After the procedure, she underwent cardiac rehabilitation at Temple University Hospital, and upon completion of the rehab work, Dennis’ physical therapists suggested that she join a gym to continue working out since, after all, the heart is a muscle.

“I am not a gym person, because I hate to sweat,” said Dennis, who as an alternative workout decided to take up swimming at the Pearson and McGonigle Hall swimming pool.

Dennis heard about the Transplant Games and decided that her new heart would not stop her from competing. She received her first silver medal representing Team Philadelphia by swimming 100 backstroke at the June 2006 Transplant Games.

Since 2005, she has competed in five U.S. Games and four World Games, which have taken place Sweden, South Africa, Australia, and most recently, Argentina.

In years past, Dennis has swum various meets, and has since opened herself to track and field events like shot put, discus, ball throw, long jump, and javelin with the help of Robert Beale, the track and field coach at Cheltenham High School. Beale first met Dennis at their church, Enon Tabernacle Baptist Church in Philadelphia.

“I feel so fortunate and blessed to be associated with a person of faith and a person who could easily say, ‘Listen, I have this transplanted heart here. I think I am going to take it easy from now on,’ but instead, she is living life to the fullest,” said Beale.

Dennis also became a Chaplain at Penn Medicine, working on the floor on which she lived on for more than six weeks while waiting for a new heart.

“I was having anxiety attacks anytime I would visit someone in the hospital after my transplant,” said Dennis, who gives spiritual and emotional support to those going through the transplant process. “When I went through my chaplain course, we had to deal with our personal and professional goals, and that was one of mine.”

Dennis said she often tells patients about her medals from the Transplant Games, using it as inspiration. She has a total of 32 medals, and sends all of them to her anonymous donor family along with a letter every year telling the family about her daughter and 12-year-old grandson.

She will compete in the Transplant Games of America this summer in Cleveland, where she hopes to earn more medals to send to the donor family.

“I decided I wasn’t going to sit on the sidelines and be a spectator,” Dennis said. “I was going to push myself to do more than I thought I could ever do.”