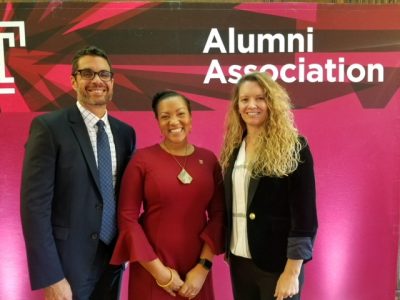 2008 alumnus, Tiffany Newmuis, was inducted  into Temple University’s Gallery of Success in recognition of her professional achievements.

An innovative strategist and programming manager, Newmuis has influenced some of Philadelphia’s largest events and organizations. A graduate of the Master of Tourism and Hospitality Management program, Newmuis has worked tirelessly throughout her career to manage the strategy, process and people involved all while implementing and directing diversity initiatives.

In her current role as Comcast’s senior manager of town hall and campus programming, she manages programming for a complex, multi-use, high-production space that serves the entire headquarters population, as well as outside audiences. Prior to joining the Comcast team, Newmuis worked on one of the most notable events in Philadelphia of our time—the 2016 Democratic National Convention. During this time, she served as deputy chief of staff and director of diversity and community engagement for the 2016 Host Committee.

The Gallery of Success is an honor bestowed by each college on alumni who have made significant achievements in the professions for which they prepared for at Temple University. Thriving in an ever-changing environment, Newmuis’s ability to adapt and continually seek opportunities have been evident through the pioneering positions she held throughout her career at Thomas Jefferson University Hospitals, the Pennsylvania Convention Center and the Glassboro Business District.